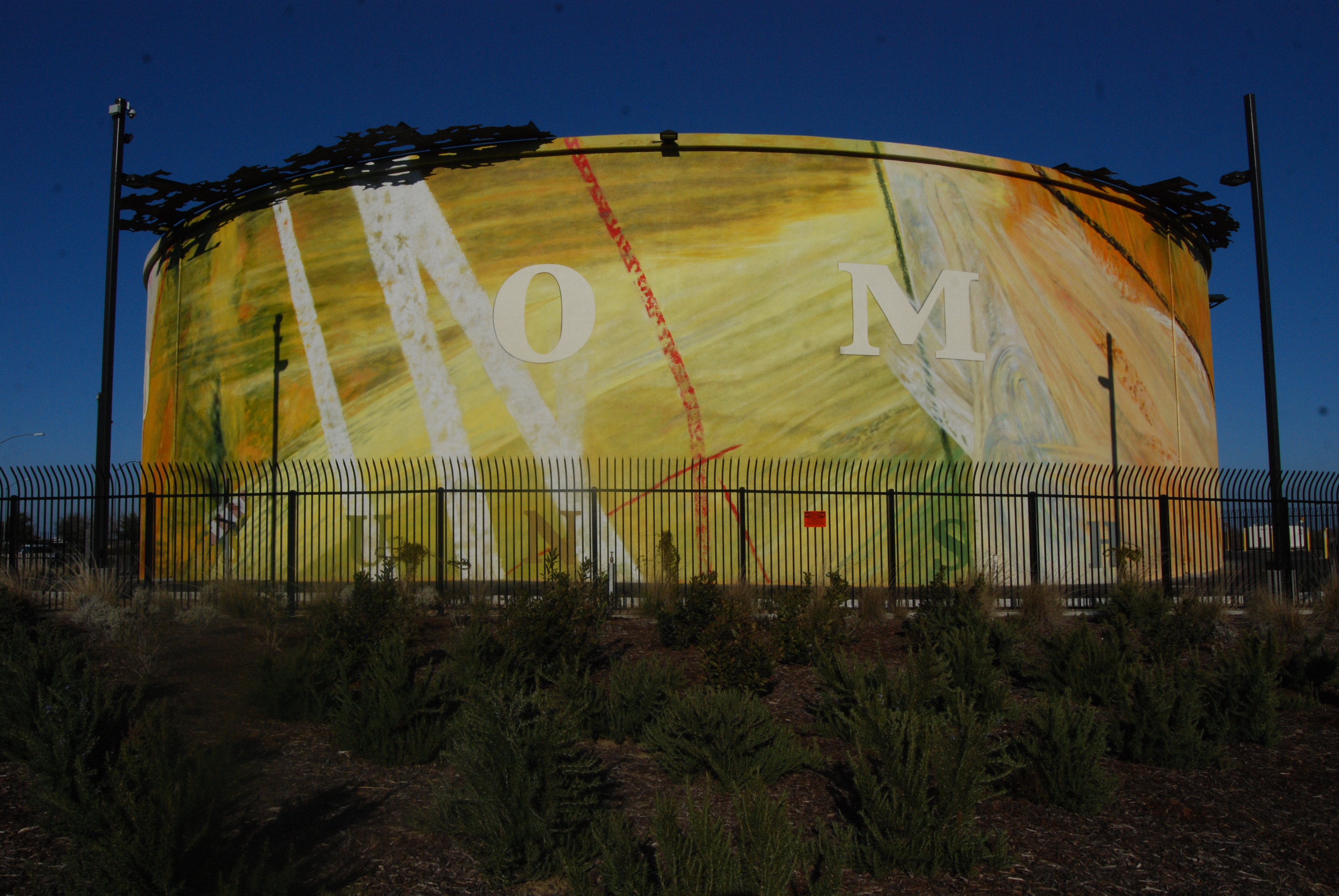 Two young women stand at the base of a colossal monster, streaked with paint from head to toe, battle scars of their undertaking.

Taking on the task of painting the large water tank located on 44085 County Road 32A are two young artists, Sophia Lacin, and Hennessey Christophel.

Lacin and Christophel are partners in art, who have been making murals in the area for the past five years. The City of Davis commissioned them to paint a mural on the water tank.

Art in Davis is nothing unusual. Davis is like a treasure island, decorated with hidden masterpieces scattered around parks, plazas, and walls. The water tank is just the newest addition.

The tank is located next to Ikeda’s and is visible from Mace Boulevard and highway 80. It’s painted now with an abstract design of colors and shadows.

When Lacin and Christophel began their extensive task, they had to come up with an idea for what they wanted on the tank, something that would reflect Davis.

“We wanted to really emphasize all those upstanding qualities Davis has. Things like, really progressive forward thinking, university influence. We wanted to capture them somehow in this one piece,” Lacin said.

Because of its commercial location, Christophel said the City of Davis wanted the water tank to greet people as they enter Davis. 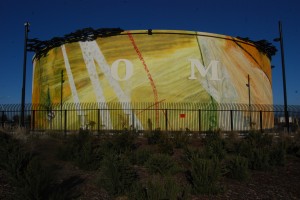 “We knew it had to really represent Davis. But [city officials] also didn’t want something that was a sort of stereotypical,” Christophel said. Leaving bikes and cow out of their mind, they focused on Davis’s other strengths.

“We kept kind of boiling our ideas down to one single word which is ‘discovery’ and that moment of discovery when abstraction becomes clarity.” Lacin said.

The two, looking for a way to illustrate an idea or discovery coming to life, were inspired by a piece Lacin had painted. For Christophel the piece is a prime example of discovery.

But they weren’t through yet creating the eloquent tank they wanted. To create life on the tank they sought to create some special effects, using the only guy who works year round for free- the sun.

With help from some local scientists and architects, the women created metal sculptures that hang over the water tank, creating shadows that are forever changing.

The sculptures include three letters, which are missing from a phrase painted on the tank. The three missing letters are on the tanks as shadows, gliding across the tank and only lining up perfectly with the other letters on summer solstice.

The phrase, sol omnibus lucet, fits quite well with the theme of the sun. It is Latin for, the sun shines upon us all. The piece is called “Same Sun.”

“To me the tank started to represent this slow passage of time that reflects the pace nature,” Christophel said.  “I’m really excited to see the shadows as they change over the course of the year.”

Lacin and Christophel spent six months working out in the sun, painting the tank. They used lifts that put giraffes to shame as well as huge rollers and airbrushes. However, most of their work was done with tiny paint brushes held in their hand.

“I see this as a positive thing,” Lacin said, “because it reaffirms the fact that you can’t really fake art. There are no shortcuts, no matter what your scale is.”

Show me the money

Whatever their methods, the two of them spent six months out there working painstakingly at the water tank by themselves. 80 percent of their $75,000 budget was spent solely on supplies, much of which were bought locally.

“I kind of roughly calculated our rate, and it’s just barely creeping up to minimum wage,” Christophel said with a chuckle.

“But it was completely worth it. We didn’t want to do this project because of the money, we wanted to do it for the opportunity and the possibility that we could make something completely different than what we ever made before, and we can affect people through art.” Lacin said.

There had been some debate over whether the whole project was worth the money put into it, although the women pointed out that the $75,000 would have been used either way because the tank still had to be treated.

Purpose of the Paint

“In painting it we related this extremely man-made object to the landscape. But as it happened, we spent six months out here in the field, and when you do that with a creative piece, you end up getting a lot of input,” Lacin said.

“I think putting art on a water tank, such a utilitarian structure, saying that this has to be here but we want it to be something beautiful as well, I think that’s kind of a nice message,” Christophel said.

And that’s the message Davis continues to send time after time.

Davis never fails to show its support for the arts, with multiple galleries downtown and sculptures and murals adorning the walls, setting the mood.

“The art is like scattered around mostly downtown; it’s very unique and abstract. Even private homes in Davis have something to contribute to the beautiful art in Davis,” Angel Ordonez, a student at DHS, said.

“I guess it’s nice for the tank to be painted, because if someone just drives by Davis, they don’t see much. Now they will see the mural which is pretty cool,” sophomore Udhe Nijjar said.

There is a lot public art can do for the environment of a town.

“Having public art, I think it means a lot for any specific location. I think it gives people a lot of pride in their community and it creates a lot of culture in a place.” Christophel said. “It’s valuable to be able to reflect to the community what you see in it.”

All Eyes on the Tank

Christophel and Lacin stood at the front of a conference room at the pence gallery, waiting for questions from their audience. After they gave a presentation on the design and process of their artwork on the water tank, audience members raised their hands and gave their opinions.

“Public art, and I’ve experienced public art with the arts commission and things, is you looking for something to give you a sense of place, and this water tank definitely, I think, gives a large sense of place to that area right over there. You know, it’s going to be meaningful, it’s going to grow on everybody,” commented a man.

A woman across the room raises her hand, “I drive that way on south from Mace Boulevard back and forth to work every day, and I have to say that when I saw something going up I was so upset. I didn’t know what it was and when I found out it was a water tank I was even more disappointed. I felt bad driving to work every day and having to see that, and now when I go by, I just feel so good. It makes me feel great, so thank you.”