If the pattern continues and if improvement is a real thing, the Davis High School varsity football team may actually—for the second time since 2004— pull out a winning record by the season’s end.

Maybe, if all goes well, the team’s goal of making playoffs will become a reality.

Standing alone, last year’s 5-5 overall record looks weak. But compared to its preceding seasons (with sub-20- percent winning stats), the 2012 team managed to make up a lot of ground. And the players are proud of the improvement. Senior captain Brendan MacDonald said, “Going 5-5 may not seem to be that good, but we play some damn good teams and I was proud of the way we played the majority of those games.”

The momentum— and the new head coach—coming into this 2013 season is unique, and could be just what Davis football needs.

Coach Marc Hicks came just in time. With the program on the brink of season-long success, he could be the guy to transform DHS football into something it has not been for a very, very long time—victorious.

Hicks was one of the nation’s top recruits in 1984. He went from Davis High to UC Berkeley, where he was a freshman sensation in 1985. The runningback later transferred to Ohio State, and his career was cut short due to injuries. Now, back on his home turf, Hicks has the players excited, and could once again make Davis football glorious.

Senior Zac Slavich, MacDonald’s co-captain, said that Hicks fills the role of head coach perfectly. “[Former Coach] Smyte leaving was a tough loss for the team,” Slavich said.  “Hicks was able to pick up where Smyte left off seamlessly. I believe that the football program will continue on its path to improvement.”

Despite major setbacks, including star receiver Ck Hicks’ ACL injury, both Slavich and MacDonald have confidence in the team to conquer. “[The injured players] played several positions very well and it will be difficult to fill those shoes, but I believe that my teammates are fully capable,” Slavich said.

The first game is at Yuba City on Aug 30, and will be broadcasted at 7:30 on News 10, ABC. Other significant games on the schedule include the first conference game: Homecoming. It will take place on Oct 11 against Monterey Trail.

According to Slavich, the most challenging games will be at the end of the season, when DHS takes on Grant on Nov 1, and Elk Grove on Nov 8.

“I believe that this team can go far if it wants to,” Slavich said. “We have a lot of talent and athleticism. Our offense and defense are both strong and competitive. The only thing limiting us is how much we are willing to commit to the program.”

“If everything works, and I mean everything…meaning we play to our highest level, perform perfectly on every play, and truly stay focused throughout an entire game,” MacDonald added, “I would be very happy to see this team go 7-3. Potentially. It would be terrific.” 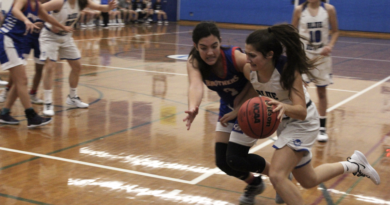