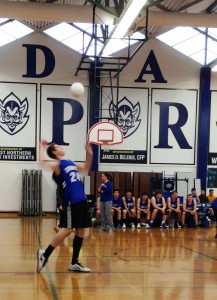 UPDATE–2/14: On Feb. 14, via Facebook, Principal Will Brown announced, “Coach Ron Duer and Coach Jordan Friend have accepted the position as Co-Interim-Coaches. Previously these two have served as assistants in the volleyball program. They hope to continue building on the recent success the program has experienced. Superintendent Roberson has granted permission for our coaches to begin practices immediately.”

The Davis High men’s volleyball program was put into limbo Sunday night, Feb.9, when Davis High principal Will Brown announced that practices had been cancelled pending the hiring of a new coach.

Given Brown’s proclamation that “we have yet to identify a coaching staff for the 2014 season,” the tenure of Julie Crawford has presumably come to an end.

Crawford, who also coaches the DHS women’s volleyball team, was dismissed from that job last June, despite the fact that she was the reigning Delta Valley Conference coach of the year. The move generated a great deal of controversy, and Crawford was ultimately rehired less than three weeks later.

Now, after a girls season that ended with a four-game defeat to Oak Ridge in the first round of the Sac-Joaquin Section playoffs, Crawford’s relationship with the school once again may be in jeopardy. Brown’s statement made no reference to whether Crawford was still employed as the coach of the women’s program.