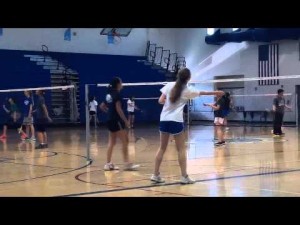 Junior Sarah Zhang is part of the Davis High varsity badminton team and number one in the singles department. Zhang beat Vacaville’s Lauren Davenport during a home game against Vacaville on April 7.

“Badminton is a lot of fun. The team gets along really well and we all have a lot of spirit,” Zhang said.

Zhang reported that while the team had lost a few games this season, it has fought back with plenty of triumphs.

“We’ve really been trying our best this year. I have high hopes for the end of the season,” Zhang said.

The Monday game against Vacaville began like any other with singles competitions. Zhang, feeling poised and ready to strike at a moments notice, approached her side of the net and greeted her Vacaville opponent Lauren Davenport.

Zhang served the ball, feeling confident. Davenport stepped back, and set a strong stance. She eyed the birdie with fiery determination, her arm retreated back, and she struck. The game had begun. Back and forth the birdie soars, slamming from racket to racket.

The game starts off with the scores constantly being measured even, one pacing forth, and the other catching up.

The first game ends and Zhang has dominated with a 21-14 score.

“She wasn’t too tough, but wasn’t too easy, either. I had to stay very alert the whole time” Zhang said.

The second round had begun, and again, the birdie was set and flying. The two players leaped and dove and slammed down with mighty force in order to eliminate their opponent.

The second round ended with a 21-15 score, again with Zhang in the lead.

With Zhang winning the first two rounds, a third one was never played.