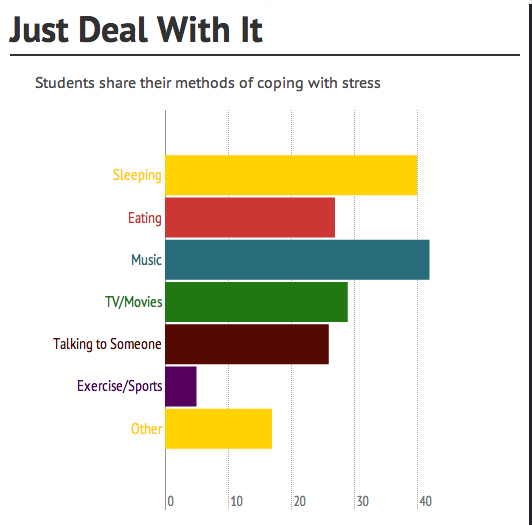 In addition to new teachers, classes and students, many new sophomores will have to deal with the menace of high school students worldwide – high school stress.

Teens today are stressed more than ever, according to a survey by the American Psychological Association. The survey showed that teen stress levels exceed those of adults at times, and that many teens are struggling to cope with stress in a healthy way.

According to the survey, teens who do not manage their stress are “potentially setting themselves up for a future of chronic stress and chronic illness.” Learning how to cope with stress in the early years of high school is important, as most students will likely deal with stress for the rest of their lives.

“It’s definitely a big shift from junior high to high school,” junior Ben Hedman said. “I think the expectations are a bit higher, especially if you take an AP or Honors class, but those expectations aren’t just from teachers. They’re from friends and parents too, so you definitely feel pressured to do well.”

Hedman says that while his first year at Davis High was not extremely overwhelming, he did begin to struggle near the end of the year after missing school.

“I guess I just felt overwhelmed by how much I had to do […] I had held good grades all year and started having trouble at the very end,” Hedman said.

The junior said that he solved the problem by discussing extensions with teachers, and spending his free time “working through everything [he] had to do.”

While getting up and doing all of the work seemed like the most obvious solution to him, Hedman also used music and sports to help him cope.

“I work better with music – it can help prevent me from getting too distracted,” Hedman said, “and swimming was nice because I could get my mind off all the work I had to do.”

“If it’s about homework, then talking with teachers can really help,” Hedman advised. “If not, then just do what you know helps you deal with stress.”

In addition to communicating with teachers, junior Elise Chu suggests that talking to parents and other people is a healthy way to cope with stress.

Like many sophomores, Chu was overwhelmed during the school year because of hard classes and a busy schedule. She advises that incoming sophomores “do not procrastinate, do the work when it’s assigned, pay attention to the teacher, and take notes.”

To help her cope with the stress in high school, Chu found relief in her extracurricular activities as it allowed her to shift her focus and meet new people.

“I found cross-country, track and piano lessons to help relieve my stress,” Chu said. “Those activities will help [sophomores] make a lot of friends.”

Junior Kanishk Pandey also said that students should expect to experience more stress in high school. “The classes and teachers are more challenging, due to the fact that they seem actually interested in the subject they are teaching,” Pandey said.

Despite his view on the increase in stress, Pandey said that he never felt especially overwhelmed or stressed during the school year. This, he said, owed largely to his newly acquired time management skills and interest in his classes.

Pandey said that taking classes seriously and expressing interest in those classes has helped him, and that this was influenced by engaged teachers. Nevertheless, he acknowledged DHS as a potentially stressful place.

“One problem with our school is our extreme drive for competition,” Pandey said. The DHS student said that this drive can cause other students to feel pressured to succeed.

Pandey also said that “everyone wants to get all A’s in everything,” and that he feels he has avoided stress by specializing in what he is comfortable with.

“My advice would be to pick classes [you] would enjoy,” Pandey said to incoming sophomores. “Take the time to see what fields you’re interested in. Obviously try to get A’s – it does matter – but having an idea of what you’re interested in is important.”

The Cure to Extended Absences

One thought on “SOPHOMORE ORIENTATION: How to deal with stress”