The Davis High men’s varsity soccer team held on to win 2-1 in a gritty, physical game against the visiting Grant Pacers.

The Blue Devils (9-2-0,5-1-0 in league) came out of the gate firing on all cylinders and kept the intensity up throughout the first half.

After several close shots on goal the Blue Devils finally slipped a goal past the Pacer defense midway through the first half. Junior Matt Cheung opened the scoring after a hectic play led to him tapping the ball in.

“I took it down the sideline but kind of miss hit the ball, then Francis [Avoce] swooped in, made a run and passed it to DJ [Villegas]. From there it kind of got bobbled in the box until I was able to tap it in,” said Cheung after the game.

The Blue Devil defense, led by senior captain Joe Rainer, was stifling for the rest of the half only allowing one shot from the Grant attackers.

The second half opened with more of the same from the Blue Devils, who had three early corners.  On the third corner, junior Isaiah Alba whipped the ball into the box directly to Cheung, who headed the ball in to give the Blue Devils a commanding 2-0 lead.

After the Blue Devils second goal the game started to slow down, which seemed to benefit Grant. The Pacer attack, which had been non-existent all game, was able to get a quick goal minutes after Cheung’s second goal, making the score 2-1.

Coach Alex Park said that he was very impressed with how his team played in the first half, but that the second half left more to be desired.

“In the first half we played the ball pretty well and passed well, but in the second half we got up 2-0 and then became a little lax and gave them that easy goal that put the fire in Grant and made our job a lot harder.”

With the lead down to just one, the Blue Devil defense once again had to hold tight against the Pacer attack. The defense answered to an onslaught of Grant shots for the remainder of the game, and the match finished with the Blue Devils up 2-1.

“We play every team twice and it’s tough when we play at [Grant’s] place because their crowd and their band get way into it to the point where we can’t even hear each other…..so it was a big win for us today because we want to make sure we win at home.” 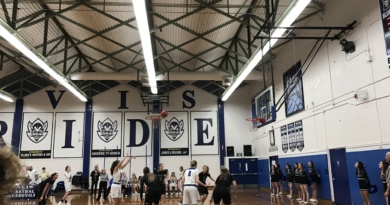 Davis falls to Woodcreek after slow second half