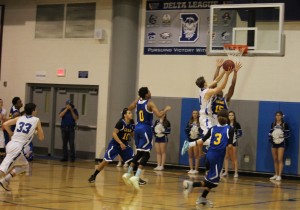 As the fourth quarter drew an end, the basketball was launched across the court in a desperate attempt by a Grant player to make a basket that would tie up the game. Luckily for Davis High, the shot missed and the men’s varsity basketball team reigned victorious over Grant 81-78.

The game remained close the entire time, neither team wanted to give up a single point knowing that the other team was only a few points behind. With a halftime score of 33-39 Grant, the Davis men knew they needed to step it up in the second half to come out with a win. Many spectators even left at halftime because they were certain that Grant would emerge victorious by the end.

But throughout the second half, the Blue Devils were able to rack up points despite junior Kevin Austin having to leave the game with an injury. Players like juniors Ryan Kriedler and Ben Prussel, as well as senior Drew Gnos scored points that were key to Davis’ win.

Coach Dan Gonzales attributes the comeback at the end of the game to the spirit and hustle of the players.

“The ball was moving,” Gonzales said. “We played more as a team, and there at the end, we were really just making that effort to find the open man.”

Junior Nathan Hassid was excited to have beaten Grant and to have contributed to the winning of the game that really boosted everyone’s spirits.

“This win means everything [to me],” Hassid said. “It’s so great to get the first win of the league season, and we look to build on it. We all came together, even through sickness, and toughed it out and got the win at home.”

Overall, Gonzales was happy with the way the team played, and hopes to see the drive from this win carry over into upcoming games.

“I thought [the game] was a character win,” Gonzales said. “It shows a lot about these guys; despite the way the season’s gone, they have not quit. There was a lot of positive talk on the bench, I’ve never heard the team really encourage each other the way they did tonight. Then when Kevin went down, it seemed like they got even more vocal.”