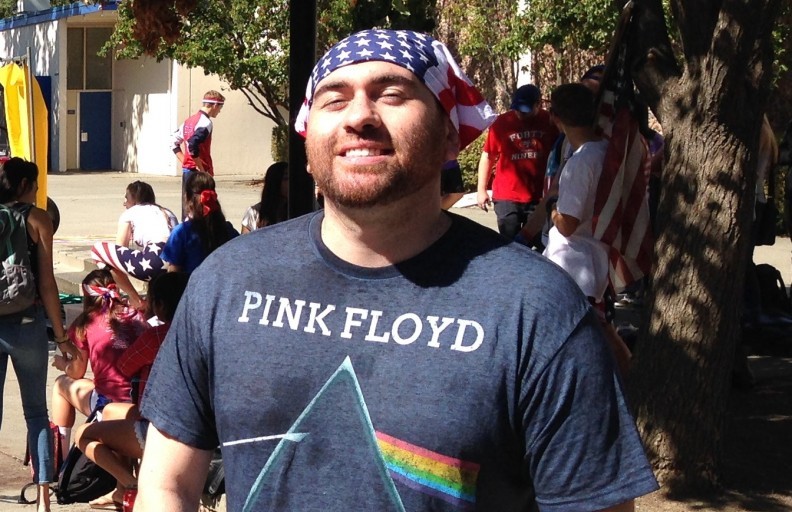 New Student Government adviser and activities director Anthony Vasquez has only been at his job for a month, but he has already made a splash, contributing ideas like the Homecoming dunk tank.

Growing up in Orange County, Vasquez wasn’t really interested in activities in high school. But at Davis High, he started to get invested.

“I just enjoy the friendship of the students,” said Vasquez, who has taught English at DHS for five years.

Before coming to Davis, Vasquez got his Bachelor’s and Master’s degrees at UC San Diego. He was a student teacher there for a class called English 220, and later taught at McClatchy High in Sacramento.

Vasquez came to DHS to teach English, but is quickly gaining a reputation for his activities work.

“I love him,” sophomore Leah Pinto said. “He’s not afraid to embarrass himself.”

At the rally on ‘Merica Monday, Vasquez, representing the junior class theme, ran out into the middle of the gym dressed from head to toe in rock attire with a bandana around his head, and slid on his knees, windmilling on a ukulele like Jimi Hendrix.

Aside from not being easily embarrassed, Vasquez doesn’t get stressed easily either.

“I don’t get stressed, I have a confident nature,” Vasquez said with a smile. “I have an amazing team of students.”

Vasquez says that Student Government knows what they need to do; they have been planning Homecoming week for a long time.