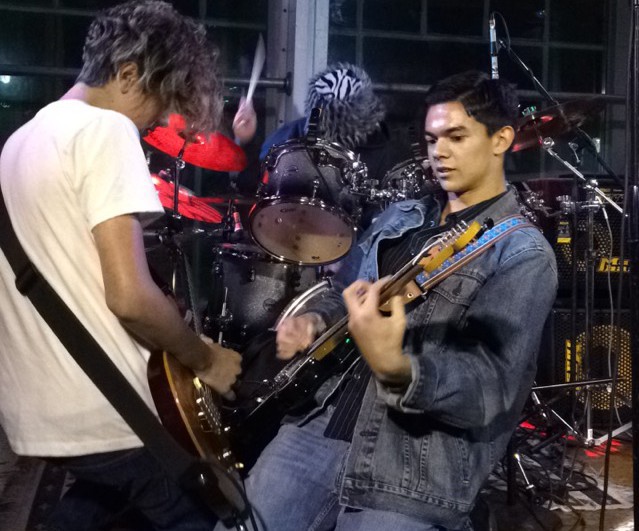 Music is one of the few human culture universals, according to a study by the Department of Psychology at McGill University. Neurosurgeons use it for concentration, armies use it for coordination and the general public uses it for regulating mood.

However, being in the music business itself can be a roller-coaster of emotions.

Audiowave, formally known as Kickstart, is a Davis High band that settled in for the ride two years ago.

Audiowave manager, guitar player and sophomore Carson Janke says he applies for at least two to three engagements a week. On Nov. 15, 2015, his band competed in Battle of the Bands in San Francisco for a chance to win $500 and a record deal.

Although Audiowave did not win, it was a finalist.

“[They were] one of the best bands of the night,” said sophomore Samantha Kurtz, an audience member at the event and a friend of the band. “I think it’s their passion; they try their hardest.”

According to lifelong musician and music teacher Andrew Enberg, that passion is necessary for success.

“If you want to be a musician, you must LOVE music,” Enberg said. “I mean really love music. If you don’t, I guarantee you won’t be a very good musician.”

“Even if it makes me a bum in the street with a guitar, I’m totally fine with [pursuing a career in music],” Warhover said.

Elizabeth Thompson, former manager at A Train Management, says it can be difficult to make a career in the music world, as there are sacrifices one has to make.

According to Thompson, musicians have to spend away from their families in the studio and on tour. Getting used to that way of life can be tough, and Audiowave has experienced the hardships of being an amateur band.

“Especially in the beginning when you have no recommendations where to play, how to reach people and how to meet people, the gigs tend to come in waves as far as number of shows per month,” Janke said.

Thompson says that performing is a big part of the career.

“You have to get out there and hustle for your tours and the tours lead to the sales of your music,” she said. “No one is going to buy your music if they haven’t heard of you.”

Local musician and music teacher Chris Wisnia has been living the difficult life of a musician for a long time.

“[A] huge challenge is building an audience and making a living from the money you make as a band, which I haven’t been able to do without a day job,” Wisnia said.

Thompson believes that it is not possible to think clearly about all these sacrifices at a young age. She says that if a young person wants to become a musician, he or she should talk to as many people as possible in the music industry and use those perspectives to decide if this is the right life choice.

“Unfortunately, it’s not just playing music. It’s business,” Thompson said, noting that when a client is signed to a record, he or she has a team of lawyers, managers and publicists to help them.

Currently, Audiowave is trying to get as much as performance time as possible without paying much thought to the technicalities of the business. For now, the band is scheduled to perform at a venue called Red House in Walnut Creek on March 12.

“We’ve played and there would be only two or three people [in the audience],” Warhover said, “but in the end, the big thing that matters is, no matter how big the audience is, you still love doing what you’re doing.”