Lucy Brazil, 21, a Davis High ‘13 graduate, attended the Democratic National Convention in Philadelphia, Pa., last week to confirm her hypothesis that Snapchat, a mobile messaging app used to share photos and videos, plays a vital role in political participation. She also visited the Republican National Convention two weeks ago to gather data and conduct surveys on the topic.

“We can generally say that Snapchat is influential, and it is a significant media news source that motivates people to get involved in the political process,” Brazil said. “I think we’ll continue to see just in general science research and political research that Snapchat is not going away.”.

“The RNC’s rhetoric is based off of negativity [and] talking about how they can avoid certain things,” Brazil said. “The DNC is much more focused on […] the positive and less focused on individual people.”

The rising senior at Wooster College in Wooster, Ohio, said her group distributed 200 surveys to people mostly in the 18-25 age range via the Internet.

“[However], we had a considerable group of people in the 40+ age range, so I think that was important to note,” Brazil said. “It was […] very diverse in terms of geographic location–what state they were from–and that was 22 states represented.”

She also mentioned the varying education level of survey participants, ranging from high school to college graduates, and the even split between men and women surveyed.

Social media and its influence on politics were Brazil’s main focus at the conventions; but she experienced historic speeches and contrasting atmospheres along the way.

“The RNC’s rhetoric is based off of negativity [and] talking about how they can avoid certain things,” Brazil said. “The DNC is much more focused on […] the positive and less focused on individual people.”

She further described the Democratic Convention as “Oh Democrats, we have to unite. We have to come together with these different party platforms, and we have to be a united front so that we can be victorious ultimately.”

“I think the protesters were really screwing his message,” Brazil said. “Sanders supporters may not agree with Hillary on a lot of things, but they agree with Trump on probably zero things.”

So when Trump was briefly leading the polls after the Republican Convention, Brazil wasn’t surprised. She attributed Trump’s lead to a phenomenon called the convention bump.

“Basically it means that at the end of the convention–whoever is hosting–that candidate will experience a bump in polls,” Brazil said. “This is a phenomenon that’s been studied in political science forever, and it’s a generally recognized rule.

After the Democratic Convention, Clinton took the lead in the polls. A factor that may have led to her convention bump is Bernie Sanders calling for Clinton’s nomination–something which not all Sanders supporters are behind.

Bernie or Bust protesters lined the outside of the Wells Fargo Center, making it clear they would not be voting for Clinton.

“I think the protesters were really screwing his message,” Brazil said. “Sanders supporters may not agree with Hillary on a lot of things, but they agree with Trump on probably zero things.”

However, the protesters might not know that if they aren’t checking their news sources on a regular basis. One convenient and reliable news source at our fingertips is Snapchat, Brazil said.

“We argue basically that Snapchat is so important because it’s different. It does what Twitter does but with images and videos,” she said.

Instagram–realizing this–decided to follow in Snapchat’s footsteps and create their own platform for temporary photos and videos called Instagram Stories.

“I just noticed it today, the Instagram story feature, and I think that that’s really indicative of the trend that things are going towards,” Brazil said. “It continues to support our hypothesis that these disappearing pictures actually have an impact on people, and that’s sort of the information that we’re craving.”

The downside, however, is that the photos and videos only last for 24 hours.

“If you don’t delve into [the issue] further, you’re getting a very surface level look into politics,” Brazil said. “When people take surface level as the whole story, that’s never a good thing. But you would rather people have some information than none.”

All in all, the political science major–who lives in a swing state–is excited for the upcoming presidential election.

“A lot of candidates will come through. Just coming from California, we don’t really experience that,” Brazil said. “It’s such a different way of looking at politics in the Midwest.”

Brazil will continue studying the election process in the fall. 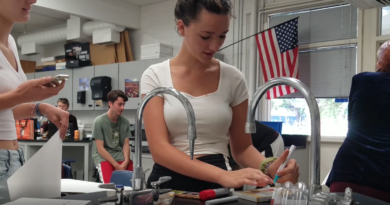