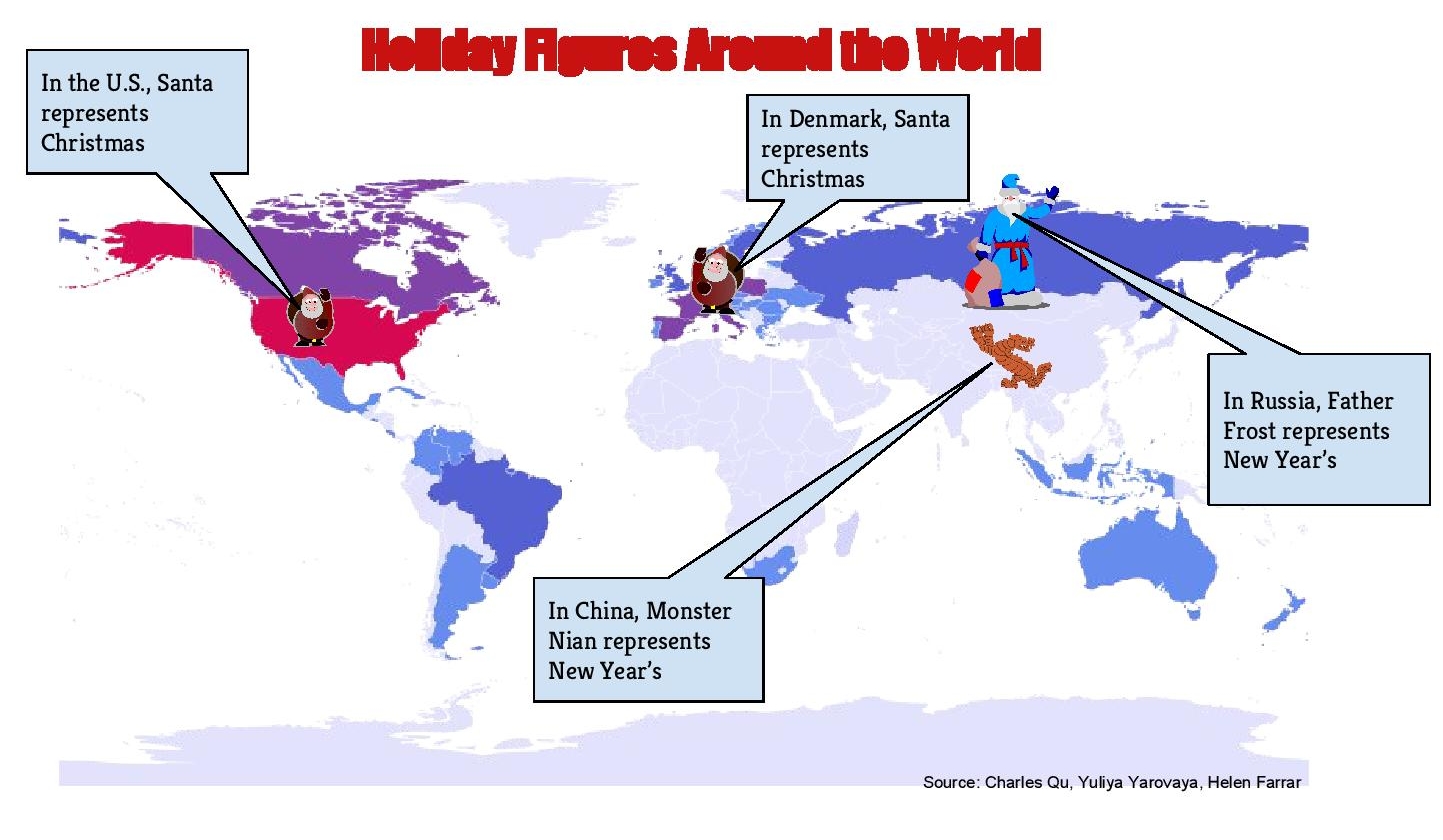 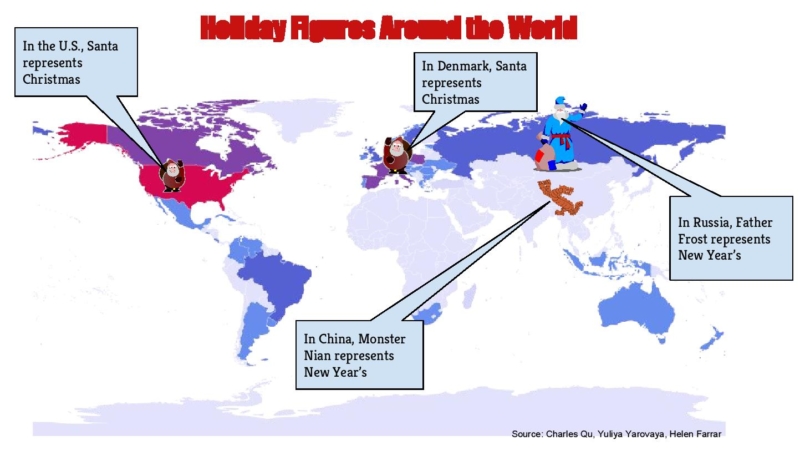 All of these immigrants moved to the United States at some point during their lives, and ended up in Davis later. Through family they have all passed on their favorite traditions for the holidays.

Around an hour before the strike of twelve of the New Year, Vladimir’s family would sit around the table and eat dinner. At twelve they would open gifts.

“You invite people over to your house and you cook a lot of traditional dishes, you sit together, you celebrate,” Yuliya said.

According to UC Davis associate professor of Russian Jenny Kaminer, the Russian New Year is the most popular holiday in Russia because the Soviet Union was originally an atheist state.

“You didn’t have official religious holidays like Easter or Christmas, so New Year’s was the big deal,” Kaminer said.

A popular tradition amongst the adults in Russia is to write out a wish for the New Year on a piece of paper, and then burn the paper to ashes. Then, you put the ashes into a glass of champagne and drink it.

You do this one minute before the clock strikes twelve, and that wish will come true.

A popular activity amongst teenagers is to find a tall boot and take it to a busy area with your friends.

“We would throw it, and where the pointy side faces, you go that way and the first guy you meet you ask his name and that’s going to be [the name of] your husband,” Yuliya said.

Another popular activity with the teenagers is to drink a cup of coffee with your friends and predict the future year based on the shape left at the bottom of the mug made out of the coffee grounds.

Finally, at the stroke of midnight, everyone comes out of their homes and wish their neighbors good luck in the New Year as they watch fireworks overhead.

“[In the U.S.] it’s Christmas that’s the major holiday […] but in Russia New Year’s Eve is the biggest celebration,” Vladimir said.

Just like in Russia, New Year’s Day is the biggest holiday of the year in China.

The week before the New Year, families head back to their hometowns to eat and socialize together. According to Qu, this week is called “The Little New Year.”

“The whole day [of New Year] is just preparing for dinner the night […] the dinner is going to take about four to five hours, you don’t really eat, you just kind of talk actually,” Qu said.

At exactly midnight, families open all of the doors and windows in their house to welcome in the New Year.

Additionally, sophomore Kevin Pan’s family cooks duck and lobster over the holiday season. Both foods are common in Chinese culture.

“It tastes a lot different compared to traditional American food, like the different spices and methods of cooking,” Pan said.

He likes the lobster, mainly because he doesn’t get to eat it very often.

Farrar has lived in the U.S. her whole life, however her family celebrates Christmas a little differently.

“My grandma came here from Denmark […] she brings her traditions and stories with her every Christmas,” Farrar said.

Just like in the U.S., the most popular holiday in Denmark is Christmas, however, it is celebrated a little differently.

Similar to the advent calendar in the United States, one Danish tradition is to use string to hang up gifts for each day of December throughout the house. Everyday, the children get to open one present.

Another tradition is to peel the skin off of a single almond and stick it into a giant bowl of rice pudding. Whoever ends up with the almond wins, and receives a prize.

Finally, after dinner, Sonne gives a blessing in Danish to say thank you for the meal.

“[By having a grandmother from Denmark I gain] perspective on how different cultures celebrate Christmas in a different way,” Farrar said.

Sophomore Gaby Tad-y and her family prepare their Filipino meal on Christmas Eve, with her grandmother usually telling everyone what to do.

“Everyone loves to stay up the night before,” Tad-y said. She says she also enjoys the special desserts they make like mango floats and halo halo, a mixture of shaved ice and evaporated milk with boiled sweet beans, coconut and fruit. They also eat pig and squid during the holidays.

The Yoo family eats steak on Thanksgiving instead of turkey. For other holidays, they eat a Korean dish called chap chae, clear noodles with vegetables, and Korean soup. Ally Yoo enjoys potstickers and noodles the most because they “taste the best.”

“Usually we don’t have the same food every time, which is good,” Yoo said.

In the Panelli household, the grandmothers cook food during the holidays. Sophomore Mia Panelli enjoys her Noni’s tortellini soup.

“I only have it once a year and it reminds me of my family,” Panelli said.

Her and her family also enjoy Panettone, a sweet bread similar to fruitcake.

“It relates to my Italian heritage but also has become a tradition in our family,” Panelli said.

Ann Evans, who co-founded the Davis Farmer’s Market and the Food Co-op, has had multiple experiences with food from different cultures. She uses many different cultures when creating her cookbooks, organized seasonally.

Evans has traveled mostly to the Mediterranean and around the world a few times, collecting recipes and cooking tips from all around the globe.

Despite the brisk weather, hundreds of people still attend the Davis Farmer’s Market on Saturday morning. Fruits, vegetables, meats and more fill the table for people to take home and cook no matter what cultural tradition they follow.

The Farmer’s Market is a place for all people to unite and find something in common: food. We all eat it, but we all eat and prepare food differently. Squash, dates, dried fruit and lamb are some of the most popular items around the holidays.

“A lot of vegetables are used across cultures, but they’re just used differently,” Evans said.