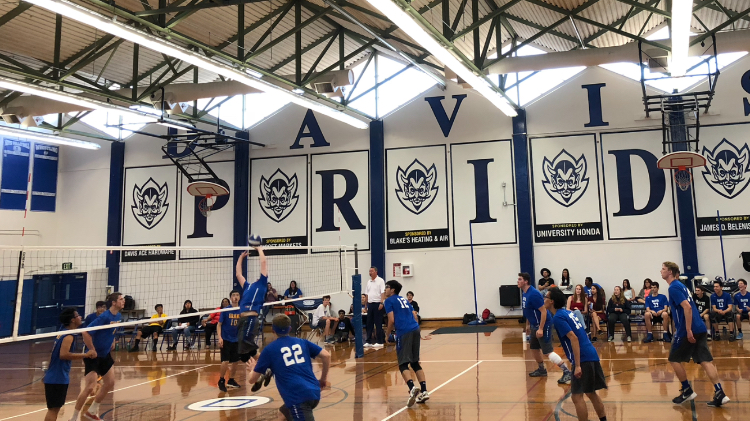 Playing in front of a raucous home crowd, the Blue Devils took care of business against Grant on Senior Night, May 2, to secure a spot in the Sac-Joaquin Section playoffs.

And on the night to honor the seniors it was the seniors who lead the way, as big men Gavin Schouten and Will Smith dominated the nets against the smaller Grant.

After losing to the Pacers earlier in the season, the Devils seemed intent on revenge, posting a dominant first set and winning 25-11.

“We had a lot of pent-up energy for this team, we really wanted to just throttle them, and I think we did that well tonight,” senior Will Wyman said after the game.

The second set was slightly more competitive, but Davis High was comfortably in control the whole way. The Devils won 25-14 on a furious spike by senior Jake Purves.

The third set was where it got interesting.

Grant won the first point of the set as well as the second, but the Blue Devils battled back to take a 6-3 lead. Grant then went on a run to tie the game at 7 apiece, and later took a 11-10 lead.

Wyman stuffed a Pacer spike to put Davis ahead 13-11 and Grant quickly called a timeout.

Coming out of the timeout, Grant was a new team, quickly regaining the lead 18-15 before Davis used a timeout of its own. The set went back and forth, each team swapping blocks and spikes before Grant took a 24-23 lead.

With the set hanging in the balance, Grant came through with a spike that Davis could not handle, putting the match at 2-1 heading into a fourth set.

Once again Grant took an early lead, but Schouten took it upon himself to ensure that lead did not stay.

With numerous blocks, spikes and digs, Schouten led DHS to a commanding 24-11 lead, before sealing the match and a Blue Devil playoff berth with a spike to the corner.

“Words really can’t put a face to it,” an emotional Purves said after the win. “Tonight really has just been amazing. My whole family came out to watch and I’m so happy we could put on this performance for them. For everyone’s family.”

“We worked hard to secure the playoff spot and now we’re in it and so our season is not over yet, we’re gonna keep grinding it out, we’re gonna play that first round game and we’re gonna win it. We’re ready to surprise a lot of people,” Wyman said.

Wyman says the Blue Devils attribute a lot of their success in the second half of the season to the early loss to Grant.

“We really kicked it into high gear training-wise after losing to these guys earlier in the season. That really woke us up, I think, and we pushed really hard the back half of the season to get to where we are right now.”

Davis plays next on Tuesday against third-seeded Nevada Union in the first round of the Section playoffs. The Blue Devils are seeded fourteenth.

“The love I feel for this team is just tremendous and it’s going to be really hard to say goodbye,” Purves said. “Hopefully, that won’t happen for a while.”