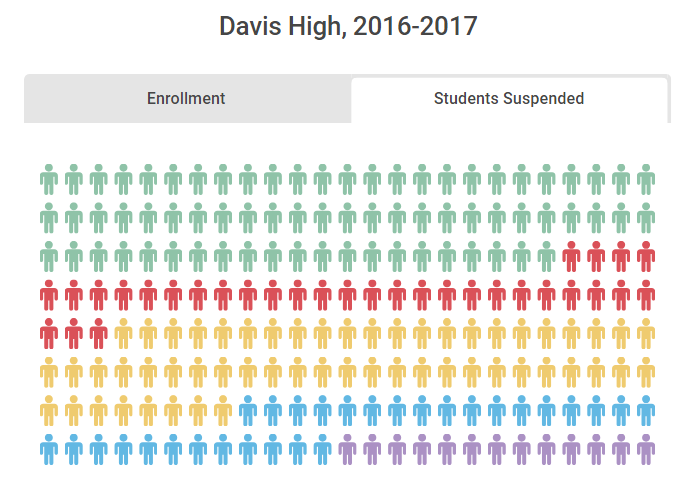 “Willful Defiance of Authority”
The majority of these suspensions came from drug-related incidents (39.8 percent), but almost a quarter (23.9 percent) were categorized as “Defiance Only,” which is an extremely subjective criterion.

For example, a DHS senior recently complained on Twitter that he received a suspension after a verbal exchange with a teacher as he was leaving the parking lot. The administration interpreted it as a threat, while the student maintained that it was an innocuous comment.

These numbers and the senior’s story suggest that unconscious racial bias may be a cause of the discrepancies in the discipline data. Some experts, such as Dr. Jann Murray-Garcia, believe that eliminating the suspension category of “willful defiance of authority” would result in better discipline balance across races and ethnicities.

California banned suspension on the grounds of defiance for grades K-3 in 2015, but this legislation is set to expire on June 1. Gov. Jerry Brown vetoed a similar bill in 2012 that would have banned for grades K-12 because “it is important that teachers and school officials retain broad discretion to manage and set the tone in the classroom,” according to Edsource.org.

Murray-Garcia says the some schools have gotten rid of “willful defiance of authority” as a reason for suspension in order to have a more objective disciplinary system. Teacher Janine Widman, however, has had to suspend students for this reason and sees it as a safety issue.

“I’ve asked a student to do something, they say ‘no’ and cuss me out (it’s happened) and then leave. If they leave the classroom, I’m in a dilemma and it’s almost a safety situation that deserves the weight of a suspension,” Widman said.

The ability to suspend students for this reason is outlined in the California Education Code for Student Discipline 48900(k), giving full power to the schools to punish for this, but not enforcing that they do so.

Widman believes that teachers typically try to deal with any sort of defiances or disruptions within the classroom if possible, but having the option to refer them to the office allows for much needed aid to teachers. However, Widman acknowledged that it is a subjective clause that could lead to unjust suspensions depending on race or ethnicity.

Race and Social Justice Origins
The concept of disproportionate discipline practices among different races at DHS is something Murray-Garcia is extremely familiar with.

In fact, Murray-Garcia has focused on this issue since 2004, when her work led to the creation of the Race and Social Justice (RSJ) class. Data collected by students, called Catalysts for Social Justice Student Research Scholars (CSJ Scholars), in 2004 and the following years is shown at the beginning of RSJ classes every year, in the film “From The Community To The Classroom.”

Now, all RSJ students must complete a research project during the year to find and solve a problem at the school or in the community, like the CSJ Scholars did regarding suspensions at DHS.

“Jann Murray-Garcia was kind of the impetus for a lot of this, and she always encourages students every few years to choose [racial bias in discipline] as their RSJ topic to update the information,” RSJ teacher Fern O’Brien said.

This year, no RSJ groups decided to investigate the topic. Last year, however, DaVinci senior Kyle Gray and his group asked, “How can the student body and school faculty function to be allies and advocates for students of color throughout their school community?”

The research was actually done as an annual project for Da Vinci, though Gray chose to focus on issues covered in Race and Social Justice. The project focused on all aspects of discrimination and exclusion of people of color, but one of the main points was revisiting the school’s discipline practices by race and ethnicity.

Gray was particularly stunned when he found out about the large disparity in punishments between students of different races. He compared the statistics for DHS and DJUSD in general to other cities of various sizes and demographics and found that the disparities was widespread.

Nationwide Disparities
The Davis Joint Unified School District (DJUSD) is aware of the racial asymmetry in suspensions. DJUSD Associate Superintendent of Instructional Services, Rody Boonchouy, said that it has worked with the LCAP Advisory Committee, the DHS Black Student Union and the Board of Education this year to “understand why this is happening.”

These groups identified “implicit bias, lack of cultural humility [and] awareness, lack of diversity on staff, [and] lack of engaging curriculum or curriculum that does not reflect diverse cultures” as main causes of the issue, Boonchouy said.

A study by the American Psychological Association shows that people of varying races tend to judge black children ages 10 or older as less innocent than their white counterparts. They also found that people believed the children were older and more culpable.

Boonchouy added that the “trend is reflective of statewide suspension rates,” agreeing with the data presented by Gray’s project.

However, another Yolo County school seems to contradict this.

Woodland Senior High School is less than 15 miles away from DHS, but its demographics and discipline statistics are quite different. In 2016, the Latino/Hispanic student population (67.1 percent) was much larger than at DHS and White student enrollment was much less (25.4 percent). African-American enrollment was pretty similar to DHS (1.1 percent).

This extremely small population at DHS goes back to Davis being an unwelcoming city, according to teacher Kevin Williams.

“El Macero used to have, it wasn’t redlining, but they used to have covenants that if you bought a house there you would agree not to sell to a black family. That’s all the way into the 80’s,” Williams said. He believes the lack of African-American students at DHS creates a lack of understanding that can lead to more disproportionate suspensions.

Williams believes that it is crucial that the Davis African-American population increases. “But that one always gets me: for a university town, there is no reason,” he said.

Murray-Garcia also says that a “restorative justice” discipline policy has been “successful across the nation.”

The DHS student planner defines restorative justice as a “philosophy of addressing behavior with protocols that repair harm and restore people back to a safe community.” It aims to not only punish wrongdoing, but to facilitate the re-integration of disciplined students back into school.

DHS implemented this policy after the CSJ scholars’ 2004 study. “I think the general sense was that suspending students and sending them away is not productive,” O’Brien said.

However, the high school’s use of restorative justice does not hide last year’s racially-distorted suspension rates.

“It all kind of harkens back to a script–a historical script– that says black folks are more likely to be criminals, more likely to have bad behavior, more likely to be intellectually inferior,” Murray-Garcia said.
“[A] script that says you haven’t done anything, but we’re watching for you to do something. It’s not necessarily something that you see [… ] it’s just that we have these implicit biases so ingrained in us that we perform the script no matter what.” 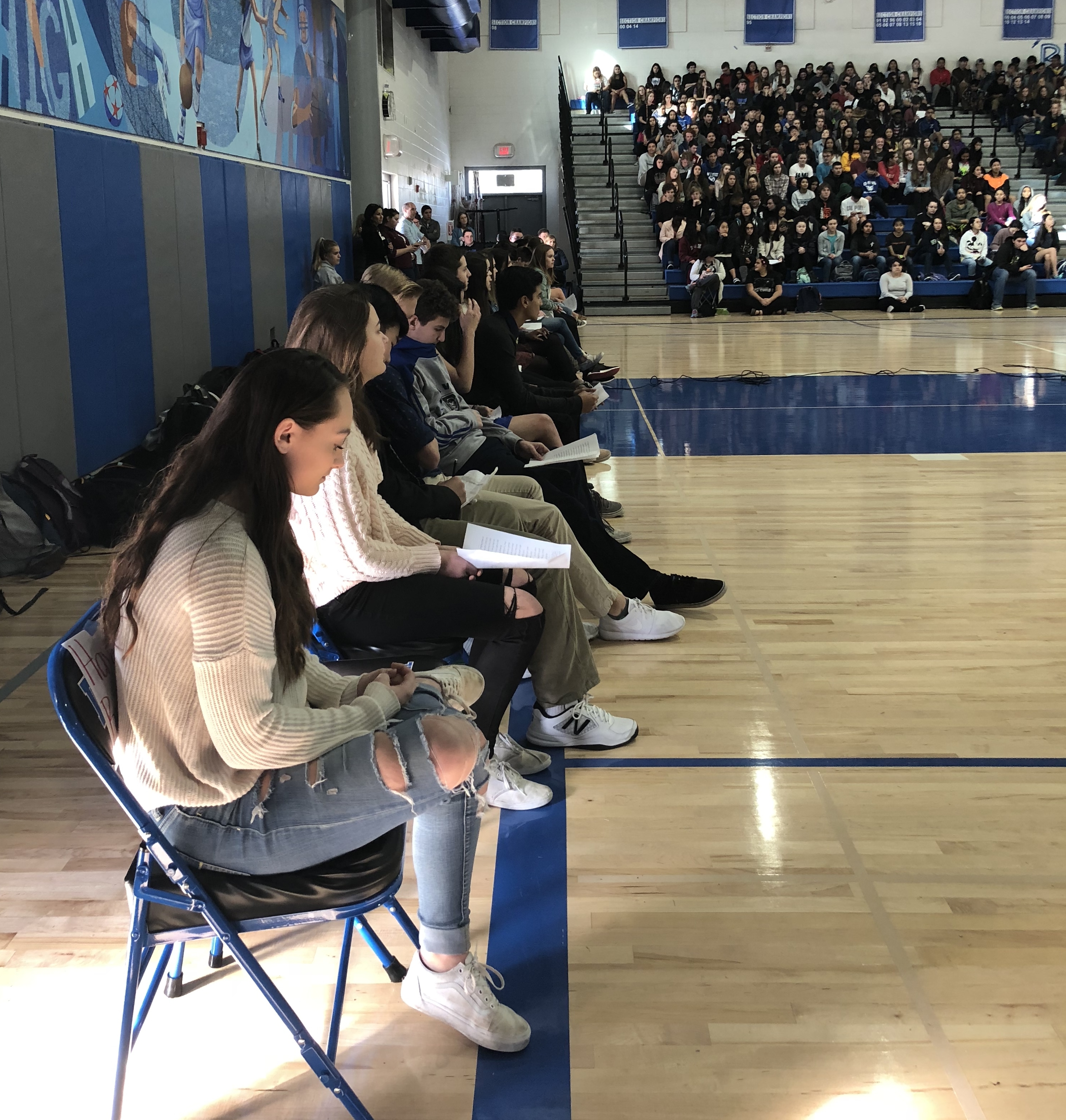 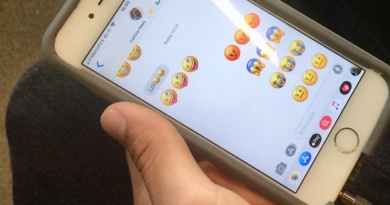 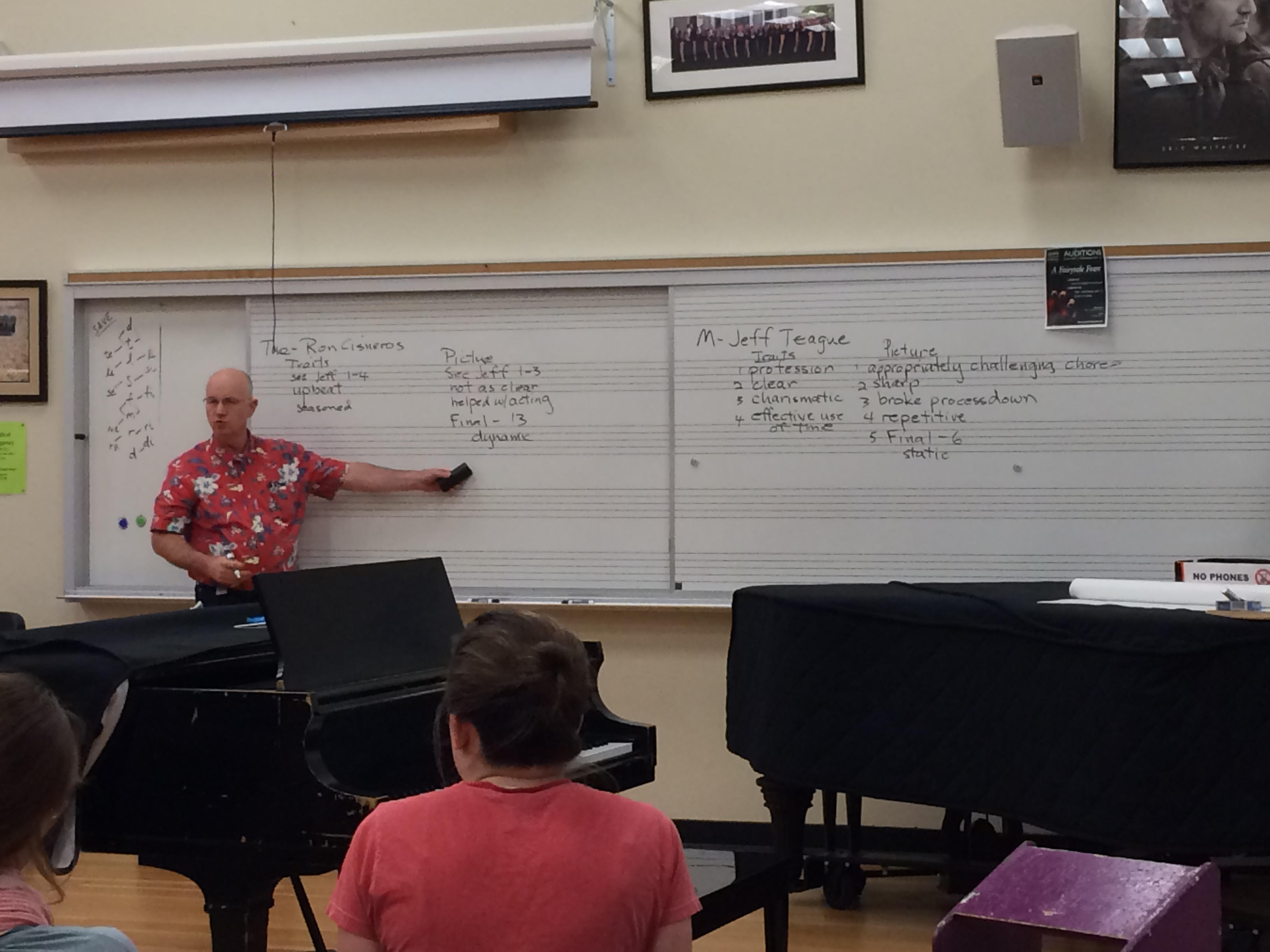