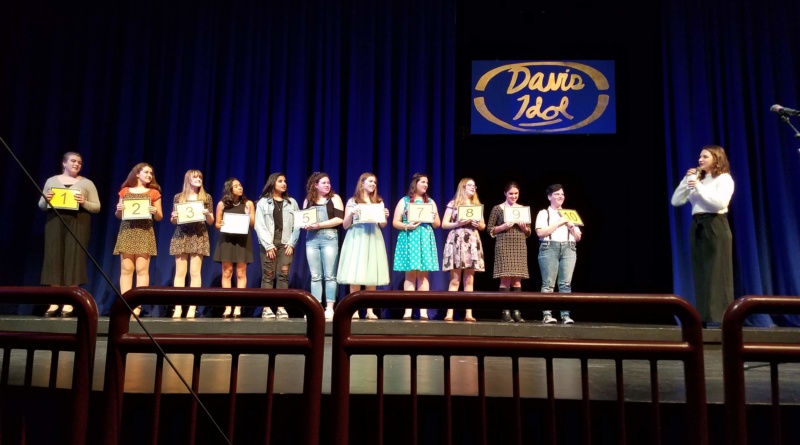 Photo: Contestants line up, displaying the numbers the audience will use to cast their votes.

Tensions ran high as the last ten competitors of Davis Idol prepared to face two skilled judges and an audience of around a hundred people on Jan. 26. The ten singers are all competing for a spot in the finals on Feb. 2.

The first singer of the night was junior Emily Landerman. Landerman is a member of Advanced Treble Choir, and her song choice was “Walking After Midnight” by Patsy Cline. The judges thought the song choice fit her strong voice very well.

Next was senior Mckella VanBoxtel who sang “Landslide” by Fleetwood Mac. The judges were very impressed with her performance, complimenting her round tone and full voice.

Junior Lily Linaweaver sang “Beautiful” from the Carole King Musical. Linaweaver received very good feedback from the judges. They were both impressed on how Linaweaver immediately commanded the stage with her powerful performance.

Senior Mariah Cortina was next, singing “La La La” by Sam Smith. Her courage was greatly appreciated by the judges.

After the duet was senior Shayleigh Thompson, singing “Manhattan” by Sara Bareilles. Thompson’s emotional performance wooed both the crowd and the judges. Deegan appreciated the time and energy Thompson spent working with the song.

LISTEN to the audience respond to Thompson’s performance:

Junior Sophie Segel sang “I’m Still Standing” by Elton John. Segel rocked the stage with both dancing and singing. The judges loved her enthusiastic attitude. “[I was] nervous but also excited,” Segel said.

Next was junior Naomi DeBello, singing “Seasons of Love” by Rent.

After DeBello was sophomore Claudia Peri, who delivered a dynamic act with the song “Because of You” by Kelly Clarkson.

LISTEN to Peri reflect on her performance:

The last singer of the night was Tim Kayden, who sang an original song. Deem was very impressed by Kayden’s dynamics and voice range. 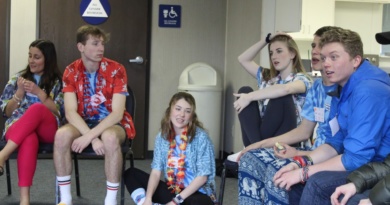