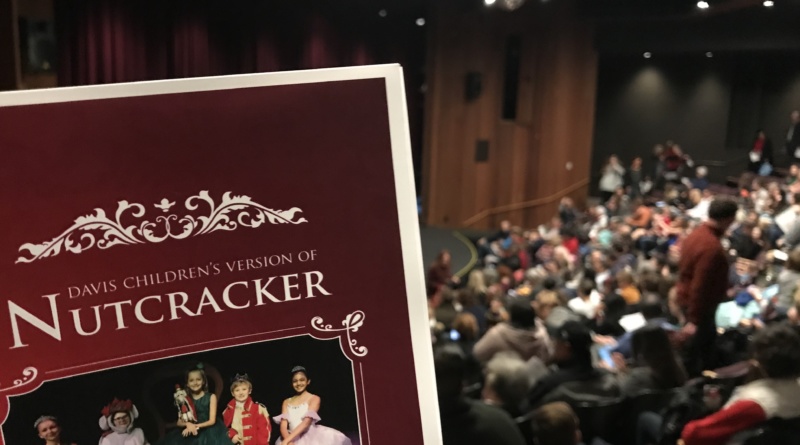 PHOTO: Audience members gather at the Veterans Memorial Center Theatre on Dec. 11 in support of the young performers about to take the stage for the Davis Children’s Nutcracker.

Backstage, a young girl fidgets with the skirt of her snowflake costume. Group leaders scramble to make sure every last-minute detail is perfect. In the audience, parents whisper eagerly with their phones cameras in hand, ready for the action about to take place before them.

Everyone can feel there is something special in the air at the Veteran’s Memorial Center Theater.

This familiar excitement and commotion is all part of the Davis Children’s Nutcracker. Started in 1977, it is a long running tradition for many Davis families.

With available roles for kids as young as age six, many Davis residents grow up participating in the show and remember their experiences fondly, including the traditional holiday music, whimsical props and worn-in, well-loved costumes.

“I know a lot of kids in Davis that do it and they have lots of fun,” 11-year-old Daphne Roe said.

Roe has the lead role of the Forest Fairy in the Davis Children’s Nutcracker this year. Her performance entailed a choreographed ballet routine en pointe and a speaking part. In this small town, having a lead role in the production is a big deal.

“I had always looked up to the leads, and wondered what it was like to be one. But now I am one,” Roe said.

Now that Roe is such a prominent aspect of the show, she realizes how much of a role model this makes her and her fellow leads to the younger cast members

“Kids from all different areas of Davis come together and work together,” said Ann Smalley, director of the Davis Children’s Nutcracker.

Anyone between the ages of 6 and 12 are welcomed, which leaves room for a variety of kids from different places and backgrounds to come together and meet each other. These kids spend many hours together and connect with each other through a shared love of performing onstage.

“You see the kids light up when they’re onstage and they have the biggest smiles ever,” junior Maya Sortor said. She is a long time Nutcracker leader.

“Everyone in the audience loves them and can’t wait to see them perform,” said sophomore Peyton Schoen, another leader.

Schoen has a history with the Nutcracker; during her childhood she has participated with the roles of a snowflake, gnome, clown, Arabian, pirate and most recently as the lead role of Clara’s mother.

This year, as a leader, she is in charge of Hawaiian dancers, and her job ensures everything with the children runs smoothly. Even though she isn’t onstage, Schoen and the other leaders’ roles behind the scenes are equally as crucial to the show, and Schoen still enjoys being a part of the special community.

“I think the Nutcracker is a big part of Davis history, and I’m happy to continue the tradition,” she said.

Just like how the cast members of the Nutcracker come together for this event, so do their parents and loved ones.

“It’s not just about the kids in [the Nutcracker] it’s about the people who come to watch it,” Sortor said. The audience who attends the Nutcracker, consisting of supportive relatives and friends, are all there for the same reason: to see the kids they love smiling and having fun.

Sortor recalls a touching moment from her past experience as a Nutcracker leader. “There was a kid in my group whose family came all the way from Mexico to see them perform,” Sortor said. She explains how the gathering of these special people in the kids lives means a lot to them, making for an all-around happy, welcoming, and loving atmosphere for everyone involved.

“It would be very hard to go in and watch it, and leave not feeling better,” Smalley said.

The theatre breathes life. Teen leaders step in for absent groups and flounce across the stage. Stage manager Christopher Sortor jogs back and forth from flipping the music on the phone at the corner of the stage to wielding grumbling power tools.

A large, iridescent, purple plum stands in the back, adjacent to a low-set painting of a mountain range sweeping the back wall. Little kids bustle with excitement and energy. And this is just the rehearsal.

With less than a week until the show opens, the Davis Children’s Nutcracker is in crunch time on Dec. 5. Director Ann Smalley, settled in the center of row E, is nearly as excited as all the children. She directs kids on where to go and what to do from her seat, commanding, yet kind and personable.

She is invariably positive, saying please and thank you to everyone. She applauds and exclaims the phrase “wild applause” each time a dance finishes, then moves on.

Thirty years ago, Smalley was a parent volunteer with the production.

The City of Davis invited her to step in as director. She replied, “Yeah sure.”

At the time, her son, Kellen Smalley, and daughter, Jen Smalley, were both in the production.

Kellen Smalley was playing Fritz one of those early years. On the last night, he dressed up as Santa, burst onto the stage and said, “Uh-oh! Wrong house!”

Each year, the Nutcracker cast continues the tradition of playing a joke on Smalley.

Another year, on the final night of the run, the elegant Sugar Plum Fairy sat in her throne with her hair in curlers, reading a magazine. Smalley was shocked to see her dignified lead out of costume and instead with slippered feet and wad of pink bubblegum in her mouth.

Jen Smalley remembers her mom stepping into the role of director around the time she aged out of acting in the play. As a teen leader, she loved that the other kids saw her mom in the same way she did.

“She is the kindest, most loving, most accepting person I’ve ever met,” Jen Smalley said. “And I’m not saying that just because she’s my mom.”

Many people have been touched by Ann Smalley’s kindness and dedication to the program. Smalley cares deeply about the production and everyone in it, which is evident in the way she recalls everyone’s names.

Sophomore Alicia Joo went to her preschool, Ann’s Nursery School, from which Smalley has since retired. On the first day 10-year-old Joo came to the auditions for the Nutcracker in 2014, Smalley remembered her and called her by name.

Sophomore Paige Carlock was a cast member for four years and a volunteer for two years. When Carlock would come into rehearsals on sleepy, winter afternoons, Smalley would always ask her how her day was or how she was doing whether she was a little cat at age eight or a 14-year-old volunteer.

New kids make the production a bit different each year and Smalley adapts the show to the interests of each group. She tries to make it relevant by adding popular dances and music.

“I had to tell her to maybe not have the clowns dab [a couple years ago],” sophomore Dean Fulks said.

While Smalley benefits the program, the production has also helped her.

Three years ago, her husband suddenly passed away from cancer at age 65. “He was my best friend,” Smalley said. “[He] always supported me.”

“It was devastating,” Jen said. “[He] was such a big-presence… [Now] there’s a hole.” While the family banded together to support one another, the Nutcracker also helped to alleviate some of the anguish. “[It was] a light in my grief,” Ann Smalley said.

The Nutcracker is more than just a show for the Smalley family. “[It is] ingrained in my family’s blood,” Jen Smalley said.

Now, Ann Smalley’s grandchildren are doing the Nutcracker. In fact, Jen Smalley’s daughter played Clara in last year’s production just as she had done when she was younger.

SAT, nail it or fail it

How McDonald’s makes a difference 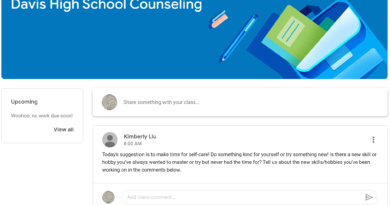