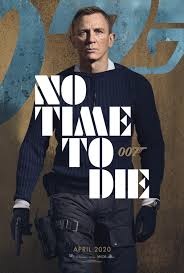 Finneas O’Connell, Billie Eilish’s brother, has been teasing the release date of Eilish’s Bond theme for weeks. Bond and Eilish fans should be relieved to know that the song was released on Feb. 14.

She will be the youngest musician ever to create a theme song for a Bond movie. The title of the song, “No Time to Die,” is the same as the title of the movie that will be coming out this April with Daniel Craig playing the detective for his final time.

The lyrics of the song offer some insight on what the movie might include. The song seems to follow an inner monologue of Bond being betrayed by his partner in crime. The chorus specifically outlines being fooled and “falling for a lie.”

The theme follows both Eilish’s music’s eerie mood, while also capturing the intensity that is associated with the Bond series. With well placed crescendos, the song is able to illustrate the hurt Bond may feel in this coming movie.

The full orchestra, which wasn’t previously present in Eilish’s music, lends grandness to the well written song, an arrangement put together by Hans Zimmer and Matt Dunkley. The string instruments that come in half way through the piece add an epic feeling. This arrangement backs up the mysterious vibe associated with Bond’s personality.

The guitar, played by Sam Smith’s guitarist Johnny Marr, is a reminder of past bond themes that opted for a funky tone. It can be heard in the background of the chorus for a few bars.

Eilish will be performing her song live at the Brits 2020, another big win this young artist is adding to her list of successes.

Overall, “No Time to Die” is a well composed, sung, and promising song. The theme is a good teaser for the movie and gives Bond fans something to look forward to. Furthermore, Eilish is able to not only crush writing the theme but is also able to add her own twist, staying true to herself, with her easily recognizable technique.

“No Time to Die” is definitely worth listening to; it will take less than five minutes of your time to be blown away once again by Eilish’s songwriting.