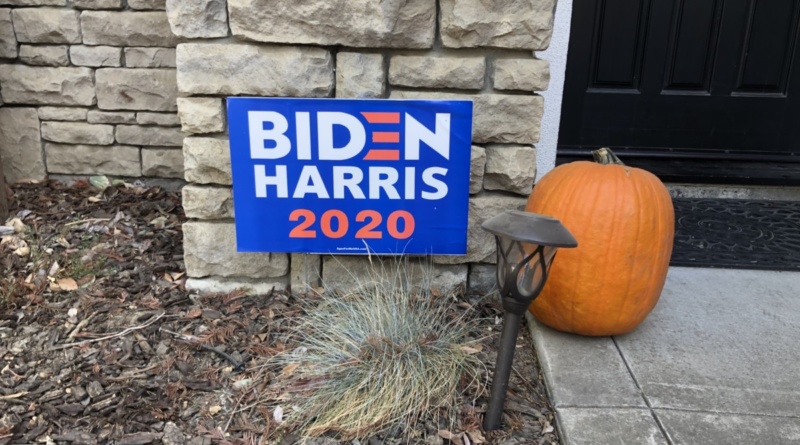 PHOTO: Activists have been handing out political signs at the Farmer’s Market.

Alan Hirsch stood behind the tables he lugged to the corner of 4th and C St. across from the Farmer’s Market on Oct. 31. This was his 259th time tabling for political involvement in Davis since 2017.  Spread across his three tables were yard signs for the Joe Biden and Kamala Harris presidential ticket.

As election day nears closer, political activists gathered at the Farmer’s Market on Saturday to hand out signs and encourage the community to get involved with politics.

“I’ve given out 3,000 American flags, a flyer called the Resist News, about 15,000 of these over the last four year, support signs, love your neighbor signs and now I’m giving out  Biden/Harris Signs because right now a vote for them seems to be a vote for democracy,” Hirsch said, an American flag mask adorning his face.

Resist News is a flyer Hirsch makes to inform and educate community members. He extended a copy to anyone walking by using a long stick to maintain six feet of distance.

“On the front of the flyer I have news, and on the back, I have actions you can take to different groups you can get involved in,” Hirsch said.

He started this project in honor of his late father, who fought in World War II. It is Hirsch’s way of giving back to the country he loves.

Tom Cronlin is also handing out signs for Biden and Harris across the street from Crepeville. He is representing the Davis Democratic Club and trying to give all of the signs away before the election on Nov. 3.

“We have all these signs that aren’t doing any good just sitting there […] they’ll buy 500 of these or a thousand of these and during the course of three months […] they’ll try and distribute them across the county and this is our last Saturday to do it,” Cronin said.

As Cronlin talked, a couple approached the bench where his signs were resting, taking an extra long glance at his set-up.

“You want one?” Cronlin asked, before handing them a sign to put in their window. Cronlin asked for a $5 contribution to cover the cost of the signs, but if someone who didn’t have money wanted one he gave them away for free.

Cronlin has been involved with politics for a long time. He worked for Obama’s campaign in 2008. He’s disappointed with the lack of civility in today’s political scene.

“You treat people with respect no matter who they’re gonna vote for but somehow [in] the last three to four years that has changed and there’s a lot of permission to insult one another or worse, and I’m not into that at all,” Cronlin said. 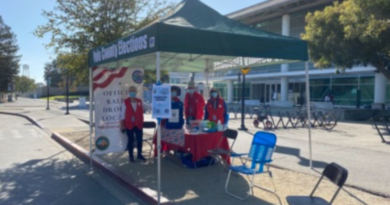 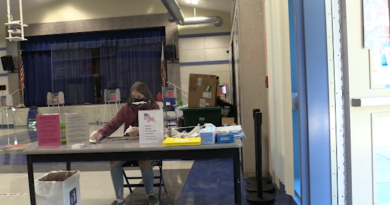 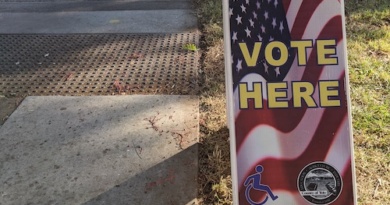