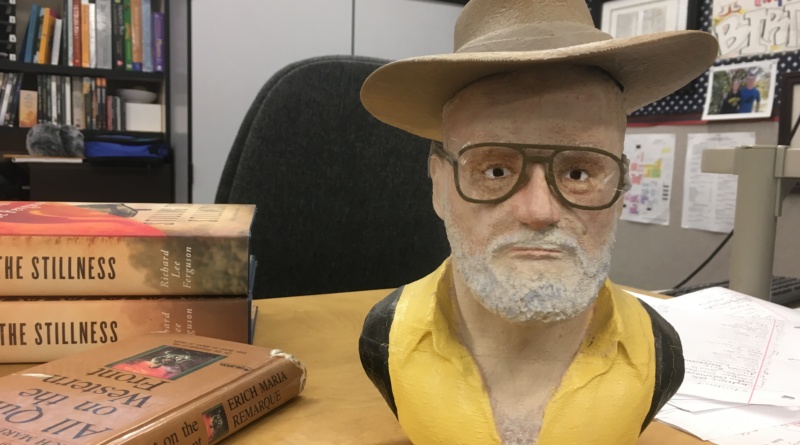 PHOTO: Richard Ferguson decorates his desk with a 3D-printed bust of his head, which was given to him by past students.

From soldier to businessman to lawyer, novelist and teacher, Richard Ferguson, 69, has a long and intriguing tale that leads to Davis High.

The decor of his DHS classroom sends a clear message to any visitor about the kind of teacher he is. Above the whiteboard are a line of quotes, all either humorous, philosophical or both. His back shelf is lined with books, papers and trinkets, including his busts of notorious dictators, Roman war helmet and a textbook sized edition of Leo Tolstoy’s “War and Peace.”

But perhaps the most interesting item is the 3D-printed bust of his own head that rests on his desk, which he says was given to him as a gift by his students at his last school, Trinity High.

Ferguson, who teaches English and history and coaches the speech and debate team, has been writing a series of novels over the past 15 years, the first of which, “Stilling the Stillness,” has already been published.

However, Ferguson hasn’t spent his whole life teaching, or even as a novelist. The story of his life has many fascinating twists and turns that have all individually influenced him and, he says, made him a better teacher.

Born in Quantico, Virginia, with a father in the Marine Corps, Ferguson moved often and attended many different high schools before graduating in San Diego in 1968, a year he describes as “embroiled in violence and controversy.”

After dropping out of college, unsatisfied with the class choices available, Ferguson was drafted into the Vietnam War. At the time, men who attended college were granted a deferment from the draft, and Ferguson knew what he was giving up by dropping out. In fact, he intended to let himself be drafted.

“I viewed the war as an anthropological opportunity to observe humans at war,” he said. “If that sounds arrogant, it was. The war beat all the arrogance out of me.”

After returning from Vietnam, Ferguson set his sights on the State Department, desiring to become the next Secretary of State. He returned to college at San Diego State, studying abroad in Taiwan to solidify his major: economics with an emphasis on China. After getting a master’s degree in Asian Studies from UC San Diego but with no jobs available at the State Department, he started his own business.

His business, which began as a consulting firm and blossomed into an international manufacturing company, was very successful. Ferguson was able to employ his Chinese background to manufacture and sell medical equipment worldwide. There was just one problem.

“I never wanted to be a businessman,” he said.

So, he turned away from his company and went to law school at night, passed the bar exam and created his own law practice. After practicing law for many years, Ferguson decided to move to Trinity County, one of the least populated areas in California, to focus on his novels.

Now teaching at DHS, Ferguson has had a positive impact on both the school and the speech and debate team.

“He is very down to earth and opinionated,” sophomore Sean Morgan said. “He is also extremely informed about what he talks about.”

“I enjoy teaching young people because their minds are still open,” Ferguson said. “I learn as much from the students as they learn from me.”

His impact on speech and debate has been especially significant.

“Without him, the team wouldn’t exist,” said Luca Moretti, a DHS alumus who plays a key leadership role in the Capitol Valley Forensics League, in which the Davis team competes. “In the past, the team has been a logistical nightmare. He has been able to pull [it] aside from [that].”

Debate competitor and ASB president Ben Skinner has felt Ferguson’s impact firsthand. “[At one tournament he] watched the entire round and [gave me] feedback that nobody else on the team could have provided,” he said.

“It amazes me how much he cares about kids. No matter the size of the tournament, he always takes time out of his schedule as an author to be there for and with us,” speech and debate team captain Cedric Hughes said. “It is clear there are so many stories he has yet to tell.” 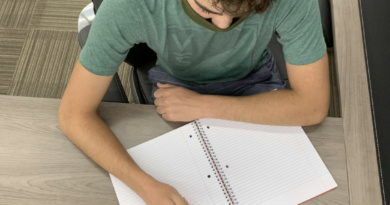