Seventy-nine registered students donated a total of 56 pints of blood at Friday’s school blood drive, sponsored by the DHS Red Cross Club. Though the amount of blood donated was significantly less than last year’s 85 pints, 62 of the donors were first-time donors, an encouraging statistic, according to Red Cross Club president Anais Sidhu. 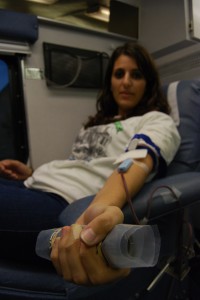 According to Sidhu, Red Cross Club helps out with the biannual blood drives by becoming the “blood drive committee,” organizing blood drive week. Volunteers are sent out to classrooms to make announcements, put up posters, take appointments at lunch, volunteer the day of the blood drive and wear Drippy the blood drive mascot’s costume.

“Red Cross Club has been organizing the blood drives for many years and I hope to keep the tradition going,” Sidhu said.

The donated blood goes to BloodSource, a nonprofit blood bank. BloodSource sent DHS three blood mobiles and students were called out of class throughout the day for their appointments.

“Most donors left happy and agreed that the experience was worthwhile,” Sidhu said.

That was true for senior Jane Tannous, who donated blood during fourth period on Friday.

“At first I was kind of nervous,” Tannous said as she reclined, donating blood, in a blood mobile, “but you can’t really feel it. […] I wanted to save lives.”

New challenges and opportunities for speech and debate