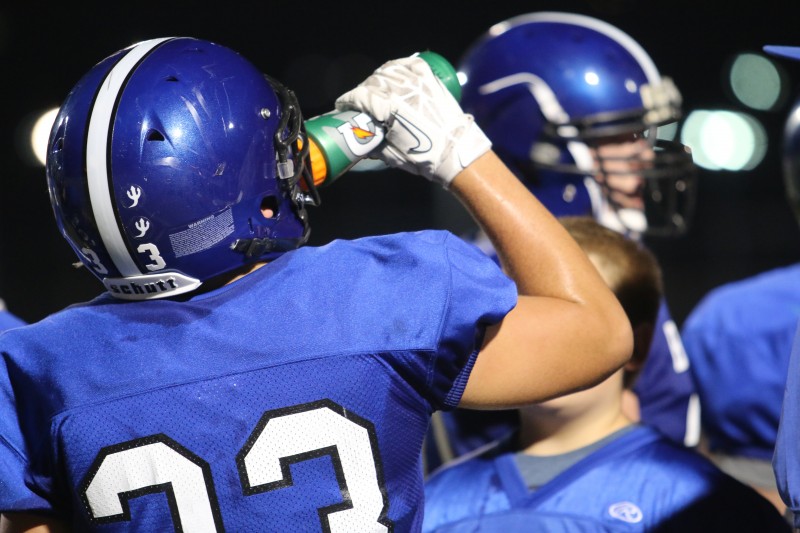 The clock ticked off its final seconds, and the Thundering Herd ran off the field cheering, coming away with a victory over Davis High, 53-13.

Elk Grove’s Defense stonewalled Davis, with only one touchdown by Davis slipping past each half. Able to constantly force Davis out of possession, Elk Grove was constantly receiving turn-overs from Davis, all the while forcing Davis to give ground.

Each time the Devils got close, Elk Grove would tighten up, forcing DHS to let up. By the time the second quarter had come to an end, Elk Grove had a serious lead, running 35-7, but the Blue Devils stayed strong, shouting encouragement to their teammates to “Stay hungry guys!”

The second half had little to offer for Davis in terms of playing options. Unable to find a hole in Elk Grove’s defense, Davis resorted to a series of runs, trying to push through.

With less than two minutes left in the game, Jack Beckman, substituting quarterback for Quinn Williams, who was unable to play due to a torn achilles tendon, made a wide right side throw to Tucker Fisk for a touchdown, a valiant yet vain effort to fight off Elk Grove in the final moments.

Friday night’s game was Elk Grove’s fourth consecutive win this season. “This is a big win for us,” said Elk Grove Quarterback Tyler Vander Waal. “We started to stay strong, but our defense just stepped it up too.”

Vander Waal attributes his team’s success to a hunger to win this year’s section championship, which they narrowly lost last year. “This year were a lot more striving for success because last year we lost the section game so were that much more hungry for greatness”

Elk Grove will be back at their home field next friday to defend their winning streak against Grant, and Davis will return to Halden Field on friday to face Jesuit.