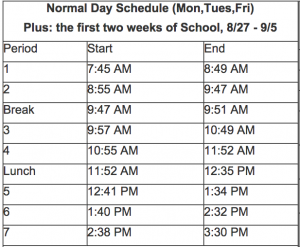 The topic of a later start time for schools has been a nationwide debate ever since The American Academy of Pediatrics released a recommendation in August that stated middle schools and high schools should start no earlier than 8:30 a.m.

School board candidates see merit to the idea, while incumbent officials are more skeptical.

Candidate Tom Adams said that he supports the recommendation because of the thorough studies and research that back it up.

“There is a chronic lack of sleep among teenagers and this is due to biological and environmental factors […] these changes are natural but difficult to change,” Adams said.

Candidate Barbara Archer also supports the science behind the recommendation.

“[A later start time] is something we need to look at seriously for DJUSD. Of course, we must meet our required number of instructional minutes, and we must make sure that school days don’t go too late, however […] later school start times have a multitude of documented benefits” Archer said.

“It seems clear to me that teenagers’ sleep cycles (circadian rhythms) do change and that one approach to accommodating the change is to allow teenagers to sleep longer in the morning […] I think that it is an important enough topic to discuss it,” school board candidate Robert Poppenga said.

Candidate Chuck Rairden joked, “This recommendation is supported by solid research and fact-based evidence. As such, I would be acting as if sleep deprived by ignoring it.”

Having raised teenagers, these candidates have had first-hand experience with sleep-deprived middle schoolers and high schoolers.

“Like any parent, I am always concerned with my teenager’s health. However, the negative effects of chronic sleep loss among teenagers are not simply an individual issue but a community one. We should be concerned about what is best for our students’ health and make it a high priority,” Adams said.

An easy solution that has been proposed is an earlier bedtime.

“My wife and I are pretty firm about our two teenagers going to bed at a reasonable time; despite this, one of our teenagers could probably benefit from some additional sleep in the morning,” Poppenga said.

However, large amounts of homework can make getting to bed early and falling asleep difficult.

“I’ve installed a gate above the stairs and padded the hallways due to sleepwalking episodes that usually involve mumblings about science projects and homework deadlines. I’m not taking any chances. And this is just for my own safety. The teenagers can fend for themselves!” Rairdan said.

Despite the numerous studies and science behind the recommendation, a later start time would not be a simple, easy change to make.

“While research evidence is an important component of setting good policy, there are other elements to be considered,” school board member Susan Lovenburg said. “Students, parents, teachers and staff would all be affected by the change […] Many secondary students already take just six periods in a school day to allow for flexibility in managing their schedules.”

Scheduling with other schools in the district conflicts as well.

“Some junior high students that take classes at DHS 1st period and then go to their 2nd period at junior high. We would need to see how many students this affects,” school board member Sheila Allen said.

“The biggest problem I hear is about after school sports. Very few athletes take a 7th period so a difference of pushing the start of 1st period [back] by 20 minutes should have no effect on them…I believe it is the right thing to do and [the start time] should change,” Allen said.

The decision will most likely not be made anytime soon due to other pressing issues occupying the school district.

“It is worth a discussion for the future. Right now DJUSD has numerous mission-critical priorities […] [such as] working to transfer new Common Core Standards,” Superintendent Wilfred Roberson said.

“With so many targets to meet, asking DJUSD to divert precious resources to reconsider school start is not the prudent course of action for this school year,” Roberson said.