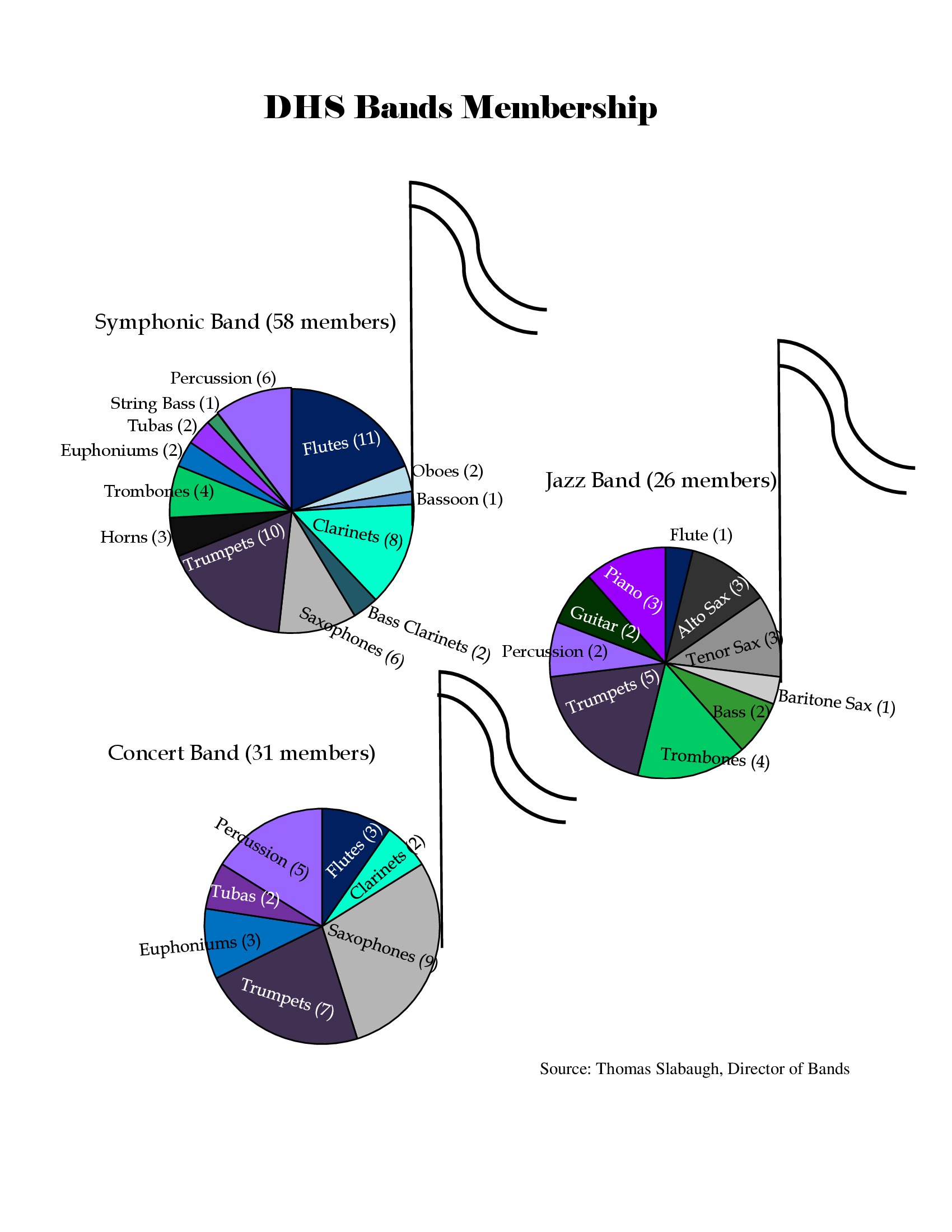 The large Davis High music room is filled with covered instruments, music stands, chairs and, of course, students. Across the front of the room reads the word “subdivide” in rainbow letters, sharing the wall with a lined white board, small televisions and posters. For many students, the room is a familiar and welcoming place.

Many DHS musicians have found a home within the band department. However, with three different bands to choose from—Concert, Symphonic and Jazz—certain factors affect students’ choices.

Da Vinci sophomore Isabella Fitzgibbon played trumpet for four years, before switching to clarinet a year ago. Fitzgibbon is currently in Concert Band because she chose not to audition for Symphonic Band.

“It’s been kind of hard for me,” Fitzgibbon said, about her switch from trumpet to clarinet.

She hopes to go back to playing a brass instrument and wants to join Symphonic and Jazz Band in the future.

“Both [bands] are really cool,” Fitzgibbon said. “I just think band is really fun, and I want to do it until college.”

“All my life I have been surrounded by musical people including my grandma, my mom, and my siblings,” Masarweh said.

While Masarweh is currently in Concert Band, joining Symphonic Band has been a dream of hers since she was 10 years old. However, freshman year when she was eligible to audition, she was “too afraid of not getting in” to do so. The next year, World War I Night, the largest project of sophomore year at Da Vinci, fell on the same week as the auditions therefore Masarweh had no time.

Masarweh also briefly considered joining Jazz Band due to influence from friends and her grandfather, who was a gifted jazz musician, but didn’t because she said she was too unsure if she would do well in the group without having knowledge of jazz scales or improvisation.

“For aspiring musicians unsure if you’re going to get into Symphonic Band or Jazz Band, or anything like that, do not do what I did and be so scared of being rejected that you don’t do it at all. Because in the end, you are left with regret because you don’t know what that step you took would have taken you,” Masarweh said. “Just don’t be afraid of the future because if you are, then you will always be holding yourself back to your true potential.”

Sophomore Marissa Wong plays flute in Symphonic Band. Wong has played flute since 5th grade, and also plays piano, which she started when she was four years old.

Last year, she had to decide to join Symphonic Band or Symphony Orchestra, opting for Symphonic because she found band more fun.

“I think our band’s really good when we’re focused […] we can get a lot of work done and move forward musically [once] we get the basic things down like tone quality,” Wong said.

Sophomore trumpet player Jessica Block is also in Symphonic Band, and is part of Madrigals on top of that.

Block began her musical journey playing piano when she was five years old, and later joined the Willett Elementary School choir and a jazz group called Jazz Cats. In fourth grade, she dropped piano and took up cello instead, and also began performing with the Davis Musical Theater Company.

In fifth grade, Block switched over to trumpet and began to get involved with Jazzmatazz, a jazz group similar to Jazz Cats. Throughout the next few years, she continued with Jazz Cats, and joined several more jazz ensembles: the Awktives and Sax By Popular Demand.

Block is now involved with both Symphonic Band and Madrigals, choosing Symphonic over Jazz because “it wouldn’t be as time consuming.” As Madrigals is already a large commitment, she “didn’t want to overbook myself, and I was already in two jazz groups and wanted some classical to balance that.”

“I would say that my music career so far has been pretty well rounded, and I hope to continue playing trumpet and singing in the future. The programs at the high school are great and I hope they continue for a long while to come,” Block said.

Senior Nathan Puckett, who currently plays bass in the Jazz Band, grew up around music. Puckett played many instruments in elementary school and junior high, including cello, saxophone and upright bass, before joining the Emerson Jazz Band in 8th grade on guitar. Since then, he has stuck with jazz, switching over to bass in the DHS Jazz Band.

Like Block, Puckett was also involved with the Jazz Cats in 8th grade, which is where he developed an interest in jazz. Later on, he auditioned for the DHS Jazz Band on the guitar, “but they knew I played bass so they put me on [that] because they didn’t need a guitarist at the time.”

Puckett has also considered joining orchestra on upright bass, but ultimately decided not to because the music didn’t interest him as much as jazz music did.

“My favorite thing about doing school bands are the festivals we go to. In Jazz Band, we go to four or five festivals throughout the year and I really enjoy both playing for a judge, or set of judges, and the clinics that we receive afterwards,” Puckett said. “I find them to be very useful learning experiences […] it’s interesting to get that perspective from other band directors.”

Aside from being involved with Jazz Band, Puckett plays as much music as he can and is a member of Crow Canyon, a student-run band.

Band director Thomas Slabaugh has noticed several differences between bands that would influence a student’s decision of which band to join.

With Concert Band, Slabaugh observed that many students were newer to music—either they hadn’t started in 5th grade, as many musicians did, or they had transferred from other schools. Many Concert Band musicians aren’t ready for audition bands but are still interested in and love music, according to Slabaugh.

Slabaugh also noted that the many options for classes at DHS can affect whether a student decides to be involved in any band. He said that since there is a wide variety of electives and AP classes at DHS, students will often fill their schedule with those classes instead of joining a band.

How McDonald’s makes a difference