Everywhere you go, there will be people you don’t like, whether it’s that irritating girl in fifth period Spanish or that rude customer at work. They are unavoidable and pop up in every corner. So what is the best way to deal with these people?

Junior Kaci Beckwith said that when it comes to people she doesn’t like, she tries her best to relax and “kill them with kindness.”

“I figure that if I’m nice to them, they’ll realize that they don’t need to be rude to me because it doesn’t affect me the way they want it to,” Beckwith said.

Although Beckwith definitely attempts to be pleasant, her anger can get the best of her, and that’s when the profanity comes out.

In excruciatingly frustrating situations, helpful hints can be found in the book “Dealing With People You Can’t Stand: How To Bring Out The Best In People At Their Worst.” Authors Dr. Rick Brinkman and Dr. Rick Kirschner point out that oftentimes, changing your own behavior can help handle difficult people.

“Change your attitude first, then your behavior: Sometimes an attitude change alone is enough. But it’s always a prerequisite for the harder task of changing your behavior,” Brinkman and Kirschner said .

After adjusting your attitude, the authors recommend controlling your anger:  “Adding your anger to an already volatile situation will simply be pouring gas on a raging fire.” 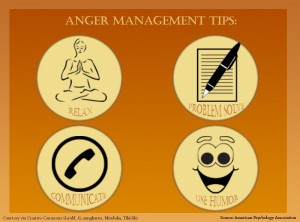 Recent graduate Emily Schroeder worked at Blaze Pizza last year and had several encounters with rude customers. She said that her chief method of cooperating with them was just to be nice.

“I just kind of smile at them and move on,” she said.

Because many stores and restaurants across the country have adopted the statement, “the customer is always right,” Schroeder never lets her anger out. Instead, she prefers to go into the back and vent about it to a co-worker or a friend.

However, Schroeder said that the boundaries she sets for herself at work are far different than the ones in her daily life when she is surrounded by her peers.

“I’m not a very confrontational person, but if someone is doing something that bothers me, I will tell them to stop,” Schroeder said.

The gift of giving