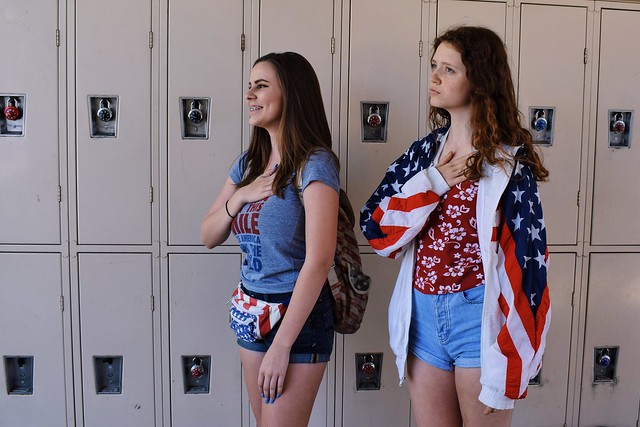 This past week, the students at Davis High pushed their usual outfits to the side and dressed up to show their school spirit to celebrate Spirit Week.

To start off the first spirit week of the year, students became walking American flags as ’Murica Monday called for red, white and blue clothing patterned with stars and stripes. Junior Brooke Rubenstein liked this day the best because she felt it represented the homecoming theme the best.

Some people did not share Turkovich’s opinion. There were some controversies regarding Thursday’s spirit day, according to Student Government Secretary of Spirit Anika Kingsley.

Trucker Tuesday attire included plaid shirts and baseball caps. Camouflage could be seen on students for Where’d you go Wednesday.

Friday’s spirit day was more successful, however. The majority of DHS students participated in wearing blue to show their school pride on the last day before the Homecoming Game.

“It was the easiest [day],” sophomore Lauren Limburg said. “Colors are the easiest,”

Senior Sam Shea agreed with Limburg. “It’s something that everyone likes to do,” Shea said.

To increase the involvement for future spirit week, there needs to be more incentive for students to dress up, according to Limburg.

“It was all stuff that I wouldn’t want to do unless I knew that everyone else was going to do it,” the Limburg said.

Even so, a lot of students took part in the first spirit week of the year.

“I think we had a lot of participation, especially from the senior class,” Kingsley said.

HOMECOMING: Winners of “Door Decorating and Beyond”