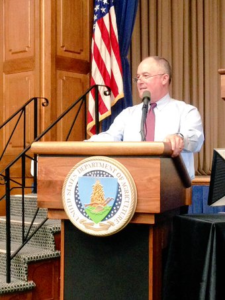 When Val Dolcini, current administrator of the Farm Service Agency and Davis High class of 1980, returned to his hometown of Davis from Washington D.C., there was an abundance of handshakes and hugs.

Dolcini arrived at the Farm Service Agency building in Davis on G street this September so that he could give a presentation to people involved in agriculture from all over northern California. Dolcini, who was appointed by President Barack Obama to be the administrator of the FSA in 2014 and has served in the position for two years, oversees 15,000 employees working in  2,200 offices across the nation. Many of those offices are in the agricultural heartland of the country, or in California and the Midwest.

The main purpose of the FSA is to provide farmers and ranchers with financial aid. The agency can trace its roots back to the Farm Security Administration, which was created in the Great Depression to help farmers stay afloat.

Dolcini explained that many agricultural workers still need assistance today because of declining crops or natural disasters, like the drought and wildfires in California.  The agency he leads has an “important commitment to the men and women who grow our food.”

Together with the United States Department of Agriculture, the  FSA is helping farmers with loans and other “safety net” programs. Dolcini said he is proud the FSA was able to give more than $6.2 billion in loans in the last fiscal year.

In short, Dolcini says that farmers want “a hand up, not a hand out.”

When Dolcini was appointed in 2014, he had to move from Davis to the nation’s capital. Although he was born and raised in Davis, it was his third time living on the East Coast.

Dolcini enjoys living in Washington D.C. because it is full of history. However, he is a self-described “Californian at heart.”

Dolcini’s family has lived in Davis since the 1860s. Dolcini graduated from Davis High in 1980.

Dolcini participated actively in music and athletics. He sang in both the Madrigal Choir and the Jazz Choir, and also played for the Blue Devils tennis team.

Throughout Dolcini’s four years at DHS, he greatly admired his government teacher Bob Ross and his music teacher Richard Brunelle.

Even though Dolcini may be living in Washington D.C., he is still connected to Davis. While introducing him at a meeting in the Davis USDA office, Congressman John Garamendi said of Dolcini, “if you don’t know him, well, you haven’t been here very long.”