A group of Davis High students and adult chaperones will be headed off to Washington, D.C. in January of 2017 to attend the inauguration of the new President of the United States, president-elect Donald Trump.

The main coordinators for the trip, head counselor Courtenay Tessler and history teacher Kevin Williams, plan to take their students on a full experience of the capitol.

After having witnessed President Barack Obama’s inauguration in 2008, Williams is excited to go back to experience another moment in history.

“We were just blown away with how important it was to watch the peaceful transfer of power. As a history teacher, I’ve always taught that that’s one the unique things about American history is that we have such a peaceful transition of power, and what better place to see that than the inauguration,” Williams said.

Tessler agrees. She also hopes that by experiencing Washington D.C. and seeing the government at work, students will have a greater understanding of the political process.

In addition to the inauguration and other activities scheduled for the trip, students will be able to witness the Million Women March. The march is planned to be held on Jan. 21, and Williams predicts that the march will not be the only protest that will be taking place during their trip.

“You’re going to be able to see someone get inaugurated, and all the pomp and circumstance that comes with that, but my guess as well is that you’re going to see people voice their opinions more in a protest-way maybe [more] than they would have,” Williams said.

“You might have not seen that come out if Hillary Clinton had gotten elected. I also think that this one, the very fact that there’s a Million Women March the day after the inauguration, has a lot of kids very excited to participate in that,” Williams added. 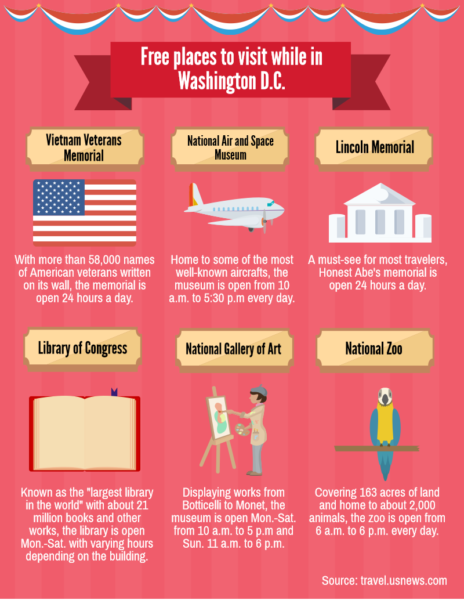 Senior Moira Williams is one of many students who plan on going on the trip. Although worried about safety, she believes that the experience will be an unforgettable one.

“The outcome of the election in November hasn’t changed my decision to go, but it has changed my attitude towards the trip. I feel like it might be more dangerous since Trump was elected. I’m excited for the trip because it’s an experience not many people have, and one that I will always remember,” Williams said.

“When I signed up over a year ago, I was 100 percent confident I was going to see the first woman get sworn into office. My parents and I talked about how cool it was that I was getting to experience such a historical moment and didn’t even think about the possibility of Trump,” O’Hanlon said.

Although shocked at the election results, O’Hanlon plans on going to the inauguration because she believes that the experience will create an opportunity for growth.

“I’m still going for several reasons, partly because I think I’ll learn and grow. I think it’s important to keep an open mind and just try and take something away from the experience,” O’Hanlon said.

Other students who were similarly shocked at the election results have decided not to attend the trip to Washington, D.C.

“I do not support Trump because of how he ran his campaign and his racist, homophobic, and misogynistic comments, among other offenses,” junior Emily Tapio said. “I wanted to go and visit the Smithsonians and the monuments, and I am sad that I won’t get to anymore, but I would rather not go and instead see a different president’s inauguration.”

Although students have differing views on their decisions to attend the trip to Washington, D.C., Kevin Williams believes that in the end people must find a way to come together and put politics aside to help the country continue to grow and prosper for the years ahead.

“Keep an open heart and an open mind. And I mean that sincerely, I know that sounds cheesy to say, but now is not the time to completely dig in and dig your trench in and absolutely not be willing to listen to anyone,” Williams said.