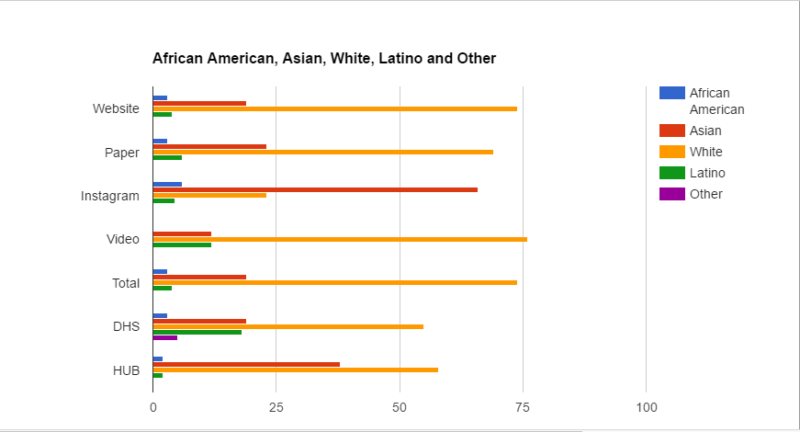 Every year, The HUB administers a diversity audit to evaluate our reporting and ensure that it reflects the Davis High student population. For the past two issues, we have compiled a list of every DHS student interviewed and photographed on HUB platforms: BlueDevilHUB.com, videos posted on BlueDevilHUB.com, The HUB, as well as our Instagram. We recorded all students by grade, gender, race and AP/honors classes in order to compare demographics with those of The HUB class and DHS as a whole.

The audit revealed that males, sophomores and Latinos were all underrepresented in the past two issue cycles.

Significantly less male students were interviewed—30 percent, compared to the 70 percent of females represented. Coverage on male students was especially lacking on the website, Instagram and videos.

We need to cover more Latinos on every platform since the percentage for each category is far below the 18 percent of Latino DHS students. The HUB class also has a very low percentage of Latino students at 2 percent.

For Instagram, we have not included enough juniors to accurately represent the 32 percent at DHS. White and Latino students also need more representation on Instagram.

No African Americans have been interviewed through video for the past two issues. Thus, we intend to focus on creating more video content with African American students for our upcoming stories.

On the other hand, the total students interviewed generally reflected the DHS student population excluding the lack of Latinos, according to the race demographics.

HUB staff members are reaching out to underrepresented demographic groups for this month’s issue. We are working to give a voice to the voiceless and monitor power through representative coverage of students to give an accurate portrayal of the DHS student body.