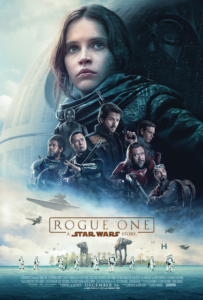 After Star Wars made a resounding comeback last year with “The Force Awakens,” the franchise’s new installment “Rogue One: A Star Wars Story”, faced a bar set so high that even Han Solo might have balked at the odds of meeting the reinvigorated fan base’s expectations.

But, thank the Maker, “Rogue One” delivers. The film truly succeeds by throwing hints of old in with the new, and by establishing that while it is in the Star Wars universe, it truly is a standalone film with a slightly different (but in the end familiar) feel.

“Rogue One,” directed by Gareth Edwards, follows the story of Jyn Erso (Felicity Jones), an orphan who becomes a criminal after her scientist father (Mads Mikkelsen) is taken by the Galactic Empire in order to complete work on the evil entity’s new top-secret superweapon.

Jyn tries to escape her troubled past, but is dragged back in when she becomes the initially reluctant leader of a group of rebels aiming to steal the plans to the Empire’s so-called “Death Star.”

Aided by a rebel captain and spy (Diego Luna), a defecting Imperial cargo pilot (Riz Ahmed), a blind Force-sensitive monk (Donnie Yen) and his gun-toting companion (Jiang Wen), as well as a droid named K-2SO (Alan Tudyk) who could put R2-D2’s sass to shame, Jyn soon finds herself and her motley crew the only thing standing between the galaxy and the Empire’s power to wreak total havoc.

From the moment “Rogue One” begins, it quickly establishes itself as subtly separate from the rest of its cinematic family. Across the screen flash the words, “A long time ago, in a galaxy far, far away…”

Silence. And then… Nothing! No swelling of John William’s classic theme, no opening crawl. “Rogue” wastes no time diving right into the story by bombarding the viewer with Jyn’s backstory, then flashing forward and bouncing through nearly half a dozen locations throughout the galaxy.

It’s in this first half of the movie that “Rogue” does stumble, if only slightly. At first, the film moves too fast, then too slow as it establishes relationships and circumstances that will lead to the climactic finale.

Battle scenes lumber on a little too long. Saw Gerrera (Forest Whitaker) is just a little too ridiculous, even for a universe that has a planet of small teddy bear-like creatures.

But once it finds its footing, “Rogue” really jumps into hyperspace. The film finds its strength in the way it blends the heartbreaking reality of war against a seemingly unbeatable opponent with the rise-up attitude that has made the films relatable to generations of kids and adults alike.

The harsher nitty gritty of galactic battle portrayed in “Rogue” means the characters are even rougher around the edges than those of the previous films. But the moral gray area they often reside in feels more modern than the more black and white portrayal of good and evil that can be found in the episodic saga films.

And, while it may be shameless fan service, the cameos (some more surprising than others, but all equally satisfying) from famous and infamous characters do add a welcome nostalgia.

In the end, like it’s protagonist Jyn, “Rogue One” manages to work through its faults and find a heroic ending. As this chaotic year comes to a close, it’s comforting to watch a movie where, after all, the destruction and a bittersweet close, the ultimate message is to never give up.

And that’s not hard to do, especially when “A New Hope” comes next.

REVIEW: The Sun Is Also a Star misses the stars