The Davis High women’s basketball team defeated St. Francis on the night of Jan. 29. The 53-50 victory ended a three-year losing streak for the Blue Devils against their rivals. Senior Kelsey Forrester sealed the win with a buzzer-beater 3-point shot to break the tie.

DHS maintained its lead throughout the first half with eight points from junior Cristina Oliva, five points from sophomore Surina Beal and four points from freshman Skylar Schouten.

In the third quarter, the Troubadours started to catch up as the intensity heightened. With only eight points from the Devils, the game was tied at 36 points at the end of the third quarter.

The lead went back and forth in the last quarter, but Forrester took control, scoring three 3-pointers, one field goal and a free throw to bring her grand total to 19 points for the game.

Beal, Agnew and Oliva all ended with eight points each, Schouten with six points and senior Gabby Arendt with two points.

Head coach Heather Highshoe was ecstatic with the win over the DHS rival and found it telling of the rest of the season.

“It’s just a huge rival game that we always want to win. I mean they’re always at the top of league so to be able to take them down is a huge deal and hopefully this will carry over to the rest of league with us,” Highshoe said.

It had been three years since the varsity women’s basketball team beat St. Francis.

“I have no words. This is honestly probably the greatest feeling ever. We’ve lost to them so many freaking times and we finally won on the freaking buzzer-beater,” Agnew said.

Highshoe added that the games are always close, within only a few points. She was particularly proud of the first quarter and the very end.

“I mean Kelsey’s shot at the end, that was by far one of the best plays of the night. But I think our start of the game, that really got us going,” Highshoe said. “We knew it was going to be an up and down battle, back and forth. They kept their composure and were able to capitalize when we needed it.”

Hear the excitement of the match and interviews with Highshoe and Agnew.

1. Team and fans are elated 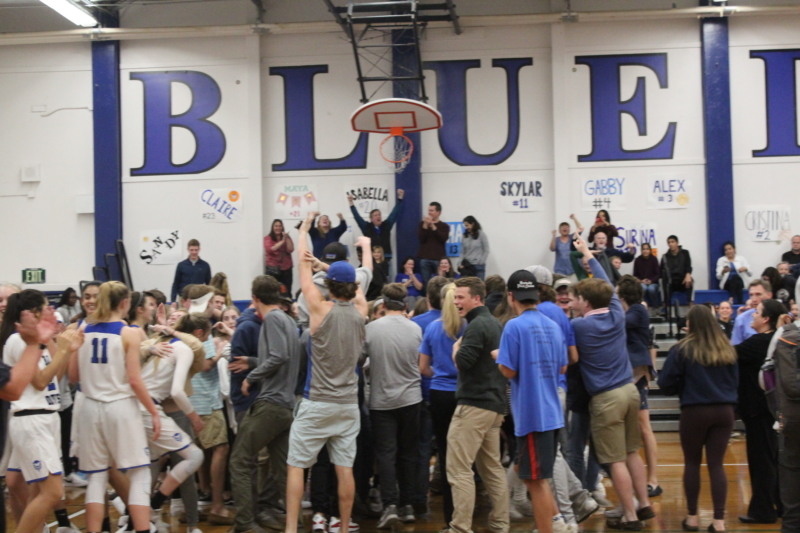