To prevent the roof of the multipurpose room from collapsing, the Davis school board made the controversial decision at their June 21 board meeting to move forward with the demolition of the entire building.
The MPR has been in critical condition for the past two and a half years. Chronic water leaks, structural problems, and mold have left it in a non-functional state.

The MPR had to be closed because of black mold growing in the ridges on the roof due to leaks.  To fix the problem, the roof had to be torn up, which exposed asbestos in the ceiling.
According to Principal Jacqui Moore, the roof of the MPR has been leaking for the past 10 to 15 years. The design of the roof doesn’t allow rain to runoff like a normal roof would. “It’s a real physics problem,” Moore said.
In a tour around the rickety MPR, Moore was able to point out obvious structural problems. She was able to explain how the original design of the triangular shaped roof proved ineffective as heavy rain poured down.
After input from the Davis High Student Forum group, the decision to replace the MPR was finalized.
According to information provided by school board member Sheila Allen, the estimated cost for the project is $1.2 million. Information from the June 21 board meeting reported that the state would contribute $757,000 and the district would match $500,000.
Some students are upset they don’t have a roofed building to eat under on a daily basis.
“There’s no other place to eat on campus during rainy or unbearably hot weather,” senior Micke Cox said.
When the MPR was shut down, the cafeteria was moved to classroom O-1. This rather unusual new location has made it somewhat difficult for students to find.
A group from Fern O’Brien’s Race and Social Justice class further investigated this issue last year.
Group member Amy Crary collected data indicating that “a lot of people didn’t know where the cafeteria was or if we had one at all,” Crary said.
With the primary location for food and other activities gone, students seem to find it less compelling  to eat on campus.
“I have had lunch from the cafeteria or snack bar on a few occasions and I have found it really awkward to try and hold the trays and eat at the same time,” Crary said.
Adapting to life on campus without an MPR has been difficult for some students.  Few even find themselves in distasteful situations when lunch spots become limited.
“I know people who get caught trying to sneak food into the library or huddle in the hallways on the dirty ground,” Cox said.
However, senior Katrina Cole feels otherwise. “I think we’re getting along fine without an MPR. It might be nice to have it up and running again but if we can find something less expensive to do with the space I think that would be more beneficial,” Cole said.

Principal Jacqui Moore said that the school will most likely build a student union in its place, which will be used as a café and study room.

However, building the union will have to wait because of the school district budget. “[It] won’t happen until there’s money,” Moore said.

Demolition of the MPR is scheduled for the summer of 2013. 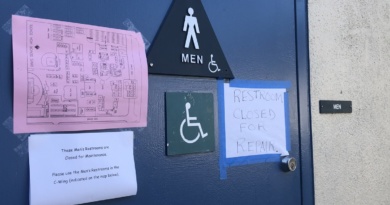 Men’s restroom closes due to another vandalism