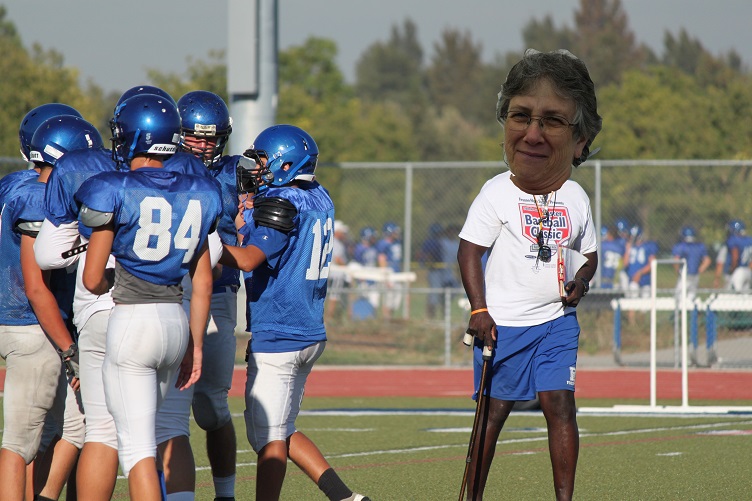 The Davis High varsity football team has found a new head coach in an unlikely place. In a surprising announcement, the district revealed that DHS Library Technician Linda York has been selected to lead the team for the 2014 season.

“In her career as a library tech, [York] has demonstrated that she has a clear head, focus, and an ability to achieve results,” reads the announcement.

Many football parents and players were shocked by York’s selection, though most have warmed to the idea.

“I was kind of skeptical at first,” senior offensive lineman Bailey Murray said. “But then she showed up to zero period and deadlifted 350 pounds. All the players got really quiet out of awe. The only sound in the weightroom was Coach York dropping the barbell and yelling ‘lightweight, baby!'”

York has expressed a desire for the team to succeed, as well as plans for how to achieve success.

“I can live up to the legacy of the team,” York said. “I have a new move to help, it’s called the weave-and-spin. Everyone runs to the middle of the field and spins around so you can’t tell who has the ball.”

She also plans to begin preparing for the upcoming season as soon as possible.

“I want to start practice immediately,” she said.

York, who competed as a professional weightlifter in the 1980s, plans to put a greater emphasis on strength and fitness in the team’s training regimen.

“We’ve already been put on a special workout and diet plan,” junior wide receiver Nathan Curtis said. “She has us eating 7000 calories a day and hitting the gym three hours a day. We also have daily scream sessions where we spend a half hour perfecting our war cries to use in games.”

In an email to the players and their parents, York justified her appointment to what few skeptics remain.

“I’m bringing a totally fresh face to the game,” she said. “I will be learning along with the team.”

True life as a gamer