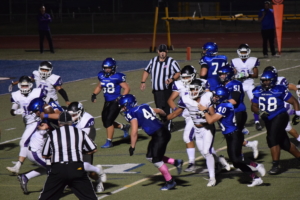 In a highly anticipated homecoming game the Davis Blue Devils shut out the Franklin Wildcats defeating them in blow out fashion 27-0 on friday night.

“We were a more physical team are guys played hard the whole game. We came in with that one game plan and carried it out.” Davis head coach Steve Smyte said.

The second half consisted of rushing touchdowns from Junior running back Taylor Vaughn and Senior quarterback Shaan Nahal as well as a touchdown pass from sophomore quarterback Luke Carrell to senior receiver Kayden Hoal solidified the Blue Devil’s lead.

On defense sophomore Zachary Brooks, who had a touchdown, fumble recovery and a load of tackles, aided the Blue Devils defense to get Davis their first shut out of the season.

“It [ fridays win ] was a total team effort from offence to defense to special teams. It sets us up well for the future.” Smyte said.

Next friday at 7:15 the Blue Devils are at home again for their final game of the regular season against Cosumnes Oaks, who have the same division record as Davis.

Davis looks to secure its spot as the number four team in the Delta League and put an end to one of the best seasons for Davis football in recent years.