The woman’s varsity field hockey team fought a vigorous game on the night of Oct. 4 against its biggest rival, the Chico Panthers. Although the Panthers scored a 2-1 victory, the Devils hustled until the end. This was the team’s first Break the Record Night and second annual Stick it 2 Cancer event.

Co-captain senior Natalie Silver started the game strongly by gaining and maintaining possession of the ball. In a matter of minutes, senior Sara Pinto dashed into a mass of Panther defenders who were congested around their goal. She intercepted the rebound off a shot by junior Rachel Foley, and sent the ball sprawling through, scoring the Devil’s first goal.

“I felt really good, I felt on fire. I felt like I could run and not get tired,” Pinto said.

Both teams’ defenses saw a lot of action. Around 17 minutes into the half, senior co-captain and goalie Ally Weir blocked a Chico shot, creating a positive and loud reaction among the Blue Devil audience.

Chico received a penalty corner a minute later and scored their first goal, equalizing the score at 1-1 with 7:03 left to play in the half. With only a couple minutes left, Pinto passed the ball to Silver for a shot, but the Panther defense held strong. The first half ended with a 1-1 tie.

Along with Marotti, other people within or related to the program who have been affected by cancer were announced and recognized. Individual players taped their jerseys with different colors (corresponding to specific cancer ribbons) to dedicate their play to affected friends and relatives.

Within four minutes of the second half, Chico made another penalty short corner goal, leading in a score of 2-1.

The Devils battled and prevented Chico from stealing more points. There were many passes between Silver and Pinto and multiple penalty corners for the Devils too.

Although the result was not ideal for coach Sandie Marotti-Huckins, she thought the game as a whole went well. Marotti-Huckins mentioned how well the team worked together. She added that Pinto and senior co-captain Kelly Ragsdale performed exceptionally.

“We played a tough game. We did things on offense and we did things on defense, and they just were just a little bit better than us this time,” Marotti-Huckins said. 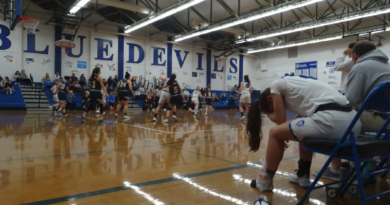