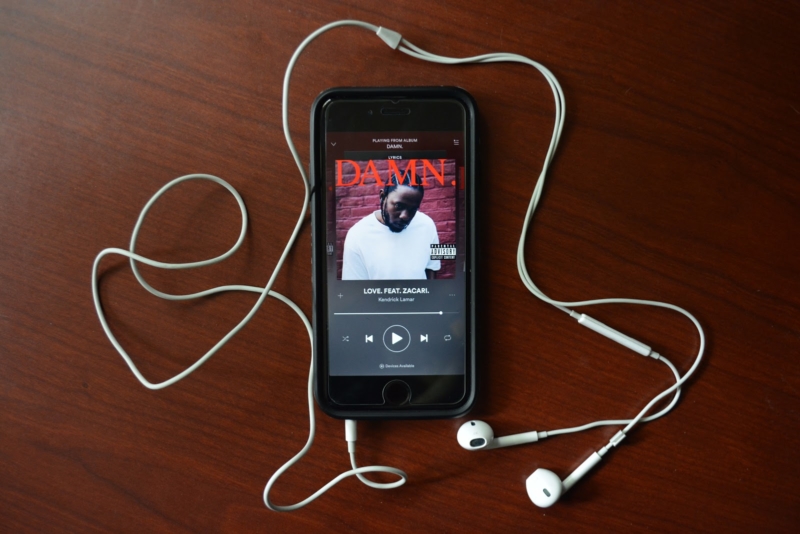 Following the release of his single “HUMBLE.” artist Kendrick Lamar dropped his much hyped album, “DAMN.” Fans went wild when Lamar teased his followers with the release of the single along with the album cover art, tracklist and album release date.

With “DAMN.” being his third album in three consecutive years, Lamar has been working steadfastly on his music, but has kept his fans waiting as he rarely releases singles or even raps as a feature on other artist’s songs. As anticipated this album was, all fourteen songs in the album made it onto the Billboard’s Hot 100 list.

Although Kendrick is typically a very private artist, he poured personal experiences and raw emotion into “DAMN.” At a time of immense political unrest and social division, Lamar does not hold back in expressing his deep seated frustrations with the struggles of being African American in America as well as his flaming disapproval of our new president.

Each song delves into these feelings of inequality and institutionalized racism, especially in the police force, as well as his take on fame and love; all which are strong themes in “DNA.,” “HUMBLE.” and “LOVE.”

Second in the album, DNA is a very poignant and fiery track, heavy with quick bars with complex words that Kendrick is able to make flow flawlessly. With an almost rock-and-roll feel, the song is intense with strong, bouncing bass as well as samples of record scratches to give a classic-rap feel.

To transition a tempo change, Kendrick breaks up the song with a soundbite that sounds as though it is from a newscaster saying, “This is why I say that hip hop has done more damage to young African Americans than racism in recent years.”

This interjection is clearly pointed at Kendrick’s disapprovers and explains how he feels that the blame of the race war in America is being inaccurately directed. The song then switches up the tempo by removing the extra background sound effects to strip down the track to allow Lamar to rap continuously for the remainder of the song and leave the listener impacted by his intense passion in his message.

Eighth on the tracklist, “HUMBLE.” is filled with a chorus demanding listeners to “sit down, be humble,”. This song describes Kendrick’s pride in his successes, but asks that the world try to be more humble. Dominated by piano to set the tempo of the track, the song is still majorly rap based but is peppered with chorus that is not the norm for the rest of the tracks in the album. This fact is potentially why “HUMBLE.” is one of the more well known songs in the album as well.

Tenth in the album is arguably the most unexpected song for Kendrick on “DAMN.” The beat is not Lamar’s typical style with its tropical and wavey– almost alternative sounding– track complete with bouncing drum and influences of techno. This song talks about Lamar asking his love-interest “If I minimize my networth will you still love me?” This question could be connected to “HUMBLE.” as

Kendrick is wondering if people claiming to care about him are really just hungry for his fame. Lamar then states “Don’t got you, I got nothing,” which shows just how truly humble he is, explaining that none of the wealth his talent has brought him will be worth anything to him if he does not have his love.

REVIEW: Starbucks’ new latte is not a must try